While you're in Austin, check out some of the sights and events that make UT and Austin a great place to be!

The University of Texas at Austin (UT) 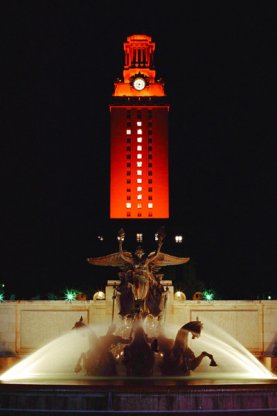 The UT Campus has its own zip code- it's that big. With a 350-acre main campus in central Austin, UT has come a long way from the original 40 acres. But one of the first things you'll notice when you arrive is how the many options, amenities, and recreational and learning opportunities offered here make the campus feel smaller. With over 50,000 students, 16,500 faculty and staff, and 900 registered student organizations there are plenty of opportunities to enhance your campus experience, explore new interests and connect to UT.

At the heart of the Austin community, the university offers a home where the creative minds of the world live side-by-side with the scientific and technological innovators of tomorrow. UT is one of the nation's leading public research universities with annual research funding of nearly $500 million. UT is second only to Harvard in the number of National Merit Scholars enrolled and has the most of any public university (2008). The university is also home to 17 libraries, making it the fifth largest library system in the United States.

A hot spot for creativity, Austin is a city rich with a diverse blend of cultures and lifestyles whose influences are readily apparent from music and dining to architecture, art and entrepreneurs of the capital city.

As the gateway to the Texas Hill Country, Austin is a blend of city comfort and outdoor living. Many people find Austin the perfect place to learn, work and play. In a matter of minutes, you can walk, bike or take a shuttle from campus to downtown or explore the great outdoors. Austin is home to 220 parks, including the 360-acre Zilker Park, miles of hike-and-bike trails around Lady Bird Lake and Barton Springs Pool, with 68-degree, spring-fed waters year round.

Austin has a humid subtropical climate with lush vegetation and rolling hills along with the Colorado River and the Highland Lakes. See today's weather.