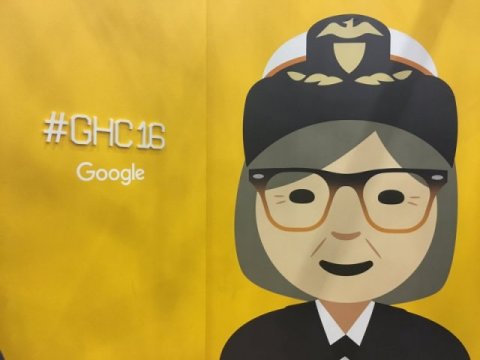 It shouldn’t come as a surprise that there’s a conference named in her honor: The Grace Hopper Celebration of Women in Computing (GHC). GHC is “the world’s largest gathering of women technologists,” featuring dozens of tech talks, meetups, career development workshops, a super-mega-career-fair-on-steroids, and keynotes by prominent figures in tech.

Because if I’m being honest, as awesome as GHC is, it would be ideal to live in a world where it doesn’t even have to exist. However, it does exist because there are deep rooted gender-disparity issues in our society and, by extension, our tech world.  There’s many legitimate reasons for women in tech to complain, mope, gripe, and rage. But as easy as it is, only dwelling on the negative aspects doesn’t do us any good.

So the fact that GHC is a CELEBRATION is important because it urges us to recognize the positive. It reminds us the celebrate all the technical achievements women have made in our field. To celebrate all of us living the life we wanted. To celebrate paving the path for all future women and minorities by being role models.

I’ve found that this Pearl of Wisdom can be applied to one’s personal life too. With interviewing season still going strong, personally it’s been really healthy to take the time to celebrate my achievments no matter how big or small. Everyone is bound to make mistakes, crash-and-burn in an interview, or get rejected at least once if not a few times. I definitely have. But instead of careening into an abyss of sadness and maybe self-pity, reflecting on my accomplishments helps ground me and balance me out. So really, each day becomes the Meghana Chappidi Celebration of Me Living Life!

Love this! Well written piece. I agree that there is much to celebrate about being a woman in computer science! As long as we stand up for ourselves and surround ourselves with supportive ppl we will be just fine :-)