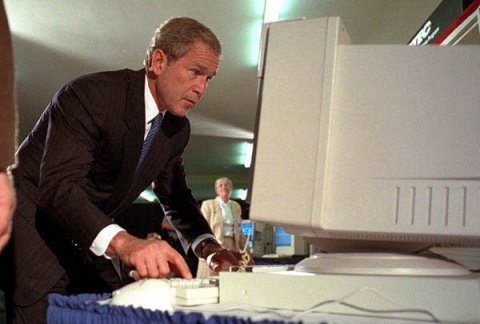 It is our duty to keep people from using 100 year old computers.

So, in light of recent political events, I guess I've been thinking a lot about our government, and specifically where we as computer scientists fit into it.

In this age of ubiquitous technology, computer scientists should be in all areas and fields of study in society, because the expertise, experience, and perspective we would lend to any topic would be a unique and valuable one. However, the fact of the matter is, there is an extreme dearth of computer scientists in government, which is frankly, a tragic oversight.

Computer scientists are invaluable and absolutely necessary in government, and should be doing everything from making sure government websites are running at maximum efficiency to actively protecting against foreign cyber attacks. Computer scientists can collect and analyze immense amounts of data about the nation and its population and utilize that data to advise policymakers to make informed decisions concerning things ranging from how to better prevent car crashes to how to combat climate change all via the marriage of big data analysis and policy making.

Personally, I've been thinking about working in government as a computer scientist ever since I listened to the Chief Technology Officer of the US speak at a symposium last month. And now, especially due to the events of the past week, I think those thoughts have been fully cemented, and honestly, I could not be more relieved. I'm glad to think that I may have found what I want to do with my life (but who knows, that might change with the next computer science speaker I listen to), but I also hope I may have opened other people's eyes to this computer science vacuum in our government.

You all know how important computer science is, and it's becoming ever more so, purely because of the fact that you chose this major. You know better than anyone that what we do is vital, but even with that knowledge, a lot of people don't think about all the different ways we're vital to society. I know many might think government is a slow-moving, outdated dinosaur that computer scientists have nothing to do with, but the reality is just the opposite. I truly believe computer scientists can bring in our knowledge in order to increase the speed of the information channel from constituents to policymakers to make government more efficient.

And who knows, maybe one of the ex-presidential candidates could have benefited from having a computers expert on their team ;)

I hope you have a wonderful week!

I missed the talk by the CTO. Would love to ask you about it sometime.
Definitely! Ask me anytime!