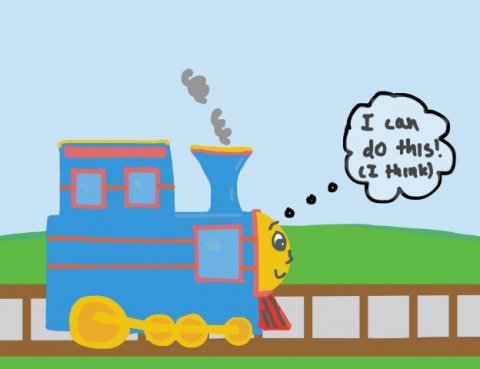 In my freshman year of high school, I hardly talked. I always assumed that other people knew better than I did, so I listened to what other people had to say and learned from them. I never took the lead in class projects; I never proposed ideas. I let other people do the thinking, and I simply carried out their grand visions. In theater, I respected my directors' decisions, and I went into auditions under the assumption that I would never be given a part. There were other people who were better than me at acting, and my only strength was my ability to work hard and follow directions. As the years went by, my experiences in high school increased my confidence. Familiarity with the audition process led to a natural formation of confidence in my ability to audition. I felt like I had learned the "rules" to theater, all the different things I had to do to succeed. I could memorize my lines, show up to rehearsals on time, and do all the things I needed to be a successful actor (although I never truly felt confident in my ability to portray emotions, but that's another story). As far as academics went, I had mastered the art of high school. Taking so many AP classes had given me the skills I needed to plow through busy work quickly and efficiently. For my last year of high school, I felt confident for perhaps the first time in my adolescent life.

And then I got to college, entering a field that I knew close to nothing about, as part of an honors program where all of my peers were experts. Suddenly, people were speaking a language that I couldn't understand, and they did it with such confidence. I just didn't understand how someone could be so sure of themselves in front of people they hardly knew. And all of the rules that I learned in high school no longer applied; computer science had a whole new set of skills that was inherently important to success. There was no way I could be confident when I was in a foreign land with new rules, new skills, and no prior knowledge or expertise. My already low confidence was lowered even more as I struggled through honors courses and realized just how little I knew. It seemed like every time I mastered a new rule, three more presented themselves, and I fell even further behind. I felt like I was never, ever going to get enough understanding of computer science to the point that I would be confident in my ability to program. My peers were all smarter than me, my schoolwork was challenging, and I just could not get to the point where I believed that I might have the expertise required to be confident.

Three semesters later, not much has changed. I am still not the slightest bit confident in my ability to be a computer science student. I don't think I'm good at writing code. I'm certainly not good at debugging it. I can't do proofs, and thinking about complex computer science problems makes my head hurt. I'm at the point where most computer science work makes me anxious at best and nauseous at worst, and I don't even bother to study for tests in my computer science classes anymore. So if you were expecting a Cinderella story about how I suddenly realized that I could be confident in my skills despite having no tangible proof that I'm a good computer science student-- well, this isn't the place for that. My realization is a little different, and it came about while working in my FRI robotics lab.

This semester, I'm part of a robotics team that's working to compete in a robotics competition this summer. The team is comprised mostly of graduate students and upperclassmen, all people with a lot more experience than I have. I figured that I would be getting instructions from the postdocs on the team and would simply be implementing what I was told to, but during our first meeting, I found my impatience with the wishiwashiness of the team causing me to take charge and drive the conversation. Now, let's be clear: I'm not the kind of person who takes charge when I don't think I have the expertise necessary to back my leadership. If I don't think I'm good at something, I will always let someone else take the lead. But for some reason, this time, I took the lead, and surprisingly enough, it felt like everyone else was three steps behind me. I wasn't used to being the one who knew the most about what was going on, but suddenly I was the one taking notes and reaching out to people and making sure that everyone knew what to do going forward. After the meeting, my research supervisor approached me and gave me a new task, having seen me taking the lead. And it felt... strange. Here I was, taking control of a situation where I certainly knew less than everyone else (there's no way I know more about robotics tasks than a postdoc or grad student, hands down), and despite thinking that I would be scared or inadequate, I had done just fine.

So I guess my lesson in all of this is that confidence isn't always necessary to do good work. I'm still not confident in my ability to code. I still don't think I have what it takes to lead a group of postdocs and grad students in discussion over robotics topics. And I certainly don't have any confidence in any of the work I do. But I realized through my experience in the lab that my lack of confidence doesn't have to stop me from plunging forward anyway. After all, I have no confidence in my ability to portray emotions on stage, yet I still choose to keep acting. So if you're like me and are short on confidence, don't let it stop you. You may think that you're going to make a fool of yourself, but you'll never get the confidence to put yourself out there until you realize that putting yourself out there isn't that bad after all.