Doing It For The Credit 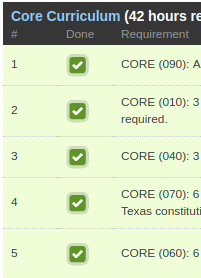 Disclaimer: This is just a perspective on my own life that hopefully resonates with someone. I'm not criticizing anyone who's double majoring. Everyone has their own reasons for doing things.

One of the few things I feel I've done right in college is not adding any certificates, minors, or other majors. Too often, people view academic interests in terms of credit. For example, freshman year, unable to contain my pretentiousness, I'd often tell people about my interest in philosophy. Most responses to this statement were not "oh, that's cool" or "oh, uh, I have to leave now", but "oh, are you gonna double major or something?"

In my personal experience as a CS major looking for software engineering jobs, I haven't seen any benefits of declaring another major or minor in a non-impacted field. Let me know if I'm missing something, or not, so I don't add "didn't double major" to my list of regrets. In some majors, like electrical engineering or finance, getting into classes as a non-major is very difficult, so it makes sense to declare the major or minor. Even in this case, I'd just declare the major to take the classes I wanted, without any intent to complete all the requirements. Someone more motivated than me could even just audit the classes.

Let's say I really wanted to fit in at upscale, pseudo-intellectual, cocktail parties by flexing a philosophy double major and so I declared one freshman year. The first two requirements are ancient philosophy and early modern philosophy. Now, I recognize the paramount importance of Plato, Aristotle, and the other ancient Greek philosophers on the field, but that doesn't change the fact that I despise the strange phrasing, awkward translations, and lack of relatability of ancient literature, find Aristotle's work boring, and so would skip every lecture and reading assignment of the class. I'd be better off not taking the class at all, as I could spend that time on pursuits that were more interesting to me.

After my first two philosophy classes, each additional class caused my interest to fade. The philosophy related questions I had coming into UT didn't require much coursework to answer, and my curiosity had been satisfied. Junior year, I took a class on Martin Heidegger. After reading one too many sentences like: "Ending, as being toward the end, must be clarified ontologically in terms of the kind of being of Dasein. And supposedly the possibility of an existing being of the not-yet that lies 'before' the 'end' will become intelligible only if the character of ending has been determined existentially" (from Being and Time), I needed to abort, or at least pass/fail. At this point, if I had aimed to double major in philosophy, I would've felt trapped. If I dropped or pass/failed the class, I wouldn't be able to complete the major on time. Even though my fading interest in philosophy was apparent, I'd agonize over dropping the major, since I wouldn't want to let the time and effort I spent on uninteresting major requirements go to waste. Since I'm an only an armchair philosopher, not bounded by any curriculum, I just pass/failed, gave up on Heidegger's more convoluted work, cherry-picked the one's that seemed the most interesting, and enjoyed the rest of the class stress-free.

Majors serve to provide a general education. You major in philosophy so you can be a well-rounded philosopher, aware of the current landscape of the field, the prominent actors, and historical successes and failures. On completion of your degree, you'll be exposed to a variety of ideas, some of which you'll be interested in, some of which you'll find boring, but all of which will be at least tangentially beneficial for further work in philosophy. I, on the other hand, was really only interested in continental philosophy. I just wanted some well thought out opinions on the best way to live life, a setting to discuss some good books, and maybe a few brain-stretching thought experiments. I don't care about Aristotle's categories and probably never will, so why would I want to be held accountable for knowing that information? I concede that I will graduate with only a superficial knowledge of philosophy, but from a personal development and curiosity satiation perspective, this was the ideal route. I'm not sure why being a dilettante has a negative connotation, it's pretty great.

Sophomore year, I took Honors Statistics (SDS 325H), which is an amazing class with a decent amount of work, but didn't check off any boxes on the CS degree plan. One of my friends recommended I pursue a statistical modeling certificate as this class fulfilled one of its requirements. This way the work wouldn't be "for nothing". I know I sound like the protagonist of a PBS Kids show, but if you enjoyed learning something, if it helped you in any way, its worth is not invalidated by its lack of utility towards your degree plan.