Ending on a Happy Note 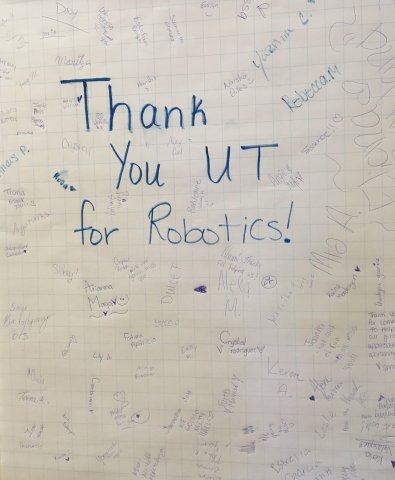 I want to end the semester by talking about a few of the cool things that I've been involved with this semester. The semester has been hectic, for sure, but the end of the semester isn't just hard because of exams and final projects. With the end of each semester comes a temporary halt to the activities that I've been pouring all of my time into. I have to say goodbye to the people who have made college enjoyable and enriching, and sometimes, that goodbye is permanent. I've had the support of a lot of different people this semester, and there's no better time than the end to show my thanks by giving them all a shoutout:

As I've mentioned before in previous posts, honors programs can be stressful and honors classes can be hard, but I wouldn't exchange it for anything else. I've gotten the chance to learn from some amazing professors and interact with some amazingly smart people. And, of course, I've had the support of a small, tight-knit community that is always there to commiserate when it comes to OS problems and the honors struggle. Turing is one of the main reasons I like UT, and I'm really grateful to the program for giving me so many great memories. You can read more about why I like Turing here. Anyway, shout out to my Turing friends-- thanks for making this semester manageable, whether it be through complaining about algo together or spending hours in the lab working on graphics. You guys are great.

I participated in the FRI program because I was required to, and I haven't regretted it. Freshman Research Initiative, usually referred to simply as FRI, is a program that gets freshmen involved in research by putting them in a "research stream" that teaches them the skills they need to work in a lab through two semesters of classes. The first FRI class was a little frustrating, if I'm being honest, and I felt like quitting, but I'm so glad that I didn't. The second semester of FRI was amazing: we got to pick our own project to implement using the lab's resources and help, and we were basically working as actual members of the lab to do real research. It introduced me to research, and I fell in love with the freedom that came along with it. I've mentored in the lab this semester, and I've really enjoyed it. I think I've been at least marginally helpful to the kids I've been mentoring, and I myself have also gotten the opportunity to do more research and work on cool robotics problems. I highly recommend FRI if you're an incoming freshman; more information can be found here. Shameless plug: do the Autonomous Robots stream! And if you're not a freshman, I recommend trying out research-- it's a lot of fun, and it's rewarding to see the stuff you're learning in classes put into practical use.

Coding in the Classroom

I've talked about the benefits of outreach before, but I'll say it again: I love outreach. I love getting to go out to a school where computer science isn't taught and give these kids the opportunity to see whether or not computer science is for them. So many of them are excited at the chance to learn something new, and they have fun even if they decide ultimately that computer science isn't their thing. It's fun to work with kids and be an influential part of their lives, of course, but it's also very rewarding to see them grow over the course of the semester/year and get better at something they didn't even know anything about initially. I miss outreach so much, and I'm excited to keep participating next semester. If you're interested in getting involved in outreach, you can learn more about volunteering with Coding in the Classroom here, and CS Roadshow and Code Orange are two other outreach orgs that I've heard good things about.

Foot in the Door

For non-CS activities, Foot in the Door has been my main source of theater opportunities. Foot in the Door is Liberal Arts Honors' theater troupe, but that doesn't mean that you can't participate. Auditions are open to everyone, and they are super welcoming to newcomers. Seriously, I've been to a fair number of auditions in my lifetime, and Foot in the Door's audition process is so welcoming and calming that it hardly feels like an audition. The level of commitment for Foot in the Door plays is easily manageable alongside a CS workload, and it's a lot of fun to spend a couple of hours pretending to be someone else. You get the added bonus of an automatic set of friends and network of support for the semester-- shoutout to my cast for being the nicest and one of my favorite groups to ever have worked with. You can learn more about Foot in the Door and keep track of when their next plays and auditions are here.

If you're a CS major looking for some ways to balance your schedule with non-CS classes, consider taking some classes with the Center for Asian American Studies! As an Asian American, I've been learning so much about the heritage and history of Asian Americans in this country, and it's not like this stuff is ever taught in U.S. History classes. You'll likely never get the chance to learn some of this information ever again, and it's enlightening and empowering to learn more about a history that is so often kept hidden. I've learned so much this semester, and I plan to take two more AAS classes next semester. In general, even if Asian American studies is not your cup of tea, I think it's well worth it to take history classes of some kind. You'll learn all the different ways that your high school history textbooks lied to you. You can look at the AAS classes being offered next semester here, and you can learn more about the Center of Asian American Studies here. I'm thankful for the courses I took this semester; my interest in Asian American studies has only been strengthened.

I'm thankful for every interaction I've had this semester. There are people who have touched me in ways that I cannot fully express, who have made my days better even if they didn't intend to just with a simple conversation. Thank you to everyone who has contributed to my life in some way. You've made me who I am, and you've helped me get through this semester. This goes for the freshmen I mentor in the FRI lab, the friends I talk to every day, the classmates I see every once in a while, the acquaintances I only see once every blue moon. Thank you. If I had the mental energy, I would write each and every one of you an exhaustive thank you card, but as it so happens, finals are occupying a fair amount of my time.

Finally, I'm thankful for you, the person reading this. It's fun to write out all my thoughts, but at the end of the day, writing is most fulfilling when it's read by someone. I like to think that my endless rambling and theorizing about the best way to live is helping someone out there, so thank you for validating me. I hope that you, too, can look back on this semester and be thankful for the experiences you've had and the people who've made it possible.