A few weeks ago, you might have noticed the shiny new plaques in the GDC, with a bunch of companies on one and a bunch of endowed scholarships on the other. This is, as any curious observer might tell you, courtesy of the Friends of Computer Science program. The companies, listed on one side, pay an annual sponsorship to be a part of FoCS. The plaques themselves are pretty cool, but it raises yet another time the ageless question, “Why should I care about FoCS?” 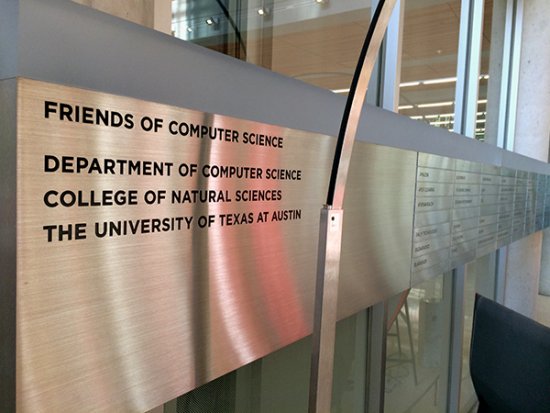 At the surface, you probably don’t. FoCS is one of those things that the department has, like weird names for the lab machines and a mysterious system of floor numbering which gives rise to a second-floor ground floor, that everyone knows about and no one questions. Occasionally, you might notice the “FoCS” banner (more of a pennant, really) stuck below the names of a handful of companies at the Career Fair, or you might notice the wall of company descriptions in the 3rd floor lab. But aside from that, relatively speaking, FoCS is mostly just a background process (so to speak), and like so many background processes, the students of the department don’t fully understand how it impacts them.

In reality, though, it’s actually one of the most important parts of our department, and more than likely, you’re taking advantage of the program without even realizing it.

The Friends of Computer Science program has been around for about 10 years now, and it’s basically identical to what are termed “industry-affiliate programs” at major CS departments all around the country. Except because UTCS is so deeply invested in getting its students internships during the summer and jobs after graduation, the FoCS program at UT is among the largest industry-affiliate programs in the country, rivaling programs at schools like MIT and Stanford. Two years ago, the FoCS program had about 28 partners; now, that number is 48. And it’s not just the number of partners the program boasts that makes it so special. UTCS prides itself on finding jobs for every niche, which means unlike many similar programs across the country, rather than specializing in one area of computer science (i.e. oil and gas, which is common in Texas, or defense contracting, which is common on the east coast), FoCS includes partners from every conceivable area of technology research.

For them, it’s a great opportunity. Big companies, who value UTCS students highly, are given the chance to create a low-pressure relationship with the department and its students, and as a sponsor of the department, they get to strengthen a place where they get a lot of their top talent anyway. For us, it’s even better -- the FoCS team looks for companies where we (i.e. the students) want to work, where our talent is needed, and where they have offices or engineering teams in places where we want to work, like Austin (eBay, IBM, Jolly, Indeed) or on one of the coasts (Bloomberg, Google, Facebook), and so we get this special relationship with all of these companies included in the cost of our tuition.

But the thing is, that’s really just the benefit to the department as a whole, which is why most people still see FoCS as something they don’t need to care about. After all, if an FoCS company and a non-FoCS company are both at the career fair, what difference does it make who pays a lot of money a year to be our “friends” and who doesn’t?

The flaw in this reasoning, says Brent Winkelman (who runs the Office of External Affairs, and through OEA, the FoCS program), is that too often we think about the FoCS program as an extra source of revenue for the college -- and then we stop thinking about it entirely. The reality is that while it’s true that the majority of the FoCS program is based on the monetary donation, the fact that a company is willing to give that much money to us means that they’re saying that our students are really important to them, and that they’re going to spend a lot of time and energy recruiting us to make up for their monetary commitment. In the minds of the FoCS partners, UT isn’t just another school where they show up for the career fair and are never heard from again; we’re a core recruiting spot, a place where they want to put their money, their time, and their energy. And from a purely pragmatic standpoint, that basically means that between an FoCS and a non-FoCS company, the FoCS company is more likely to consider your resume more carefully than the non-FoCS company. (There are, of course, exceptions, but this holds for the vast majority of cases.) In fact, on average, a FoCS company hires about 65% more students than the average non-FoCS company. And not just that, but over half of UTCS's student population goes to work for a FoCS partner.

Another big feature of FoCS that makes it different from similar programs across the country is that at most places, their industry-affiliate program is just one responsibility among many for one person in that department’s staff. At UT, the department has three full-time employees dedicated to the program—Brent Winkelman, Katie Banks, who as a relationship manager is responsible for both maintaining ties with many of the companies already in the program and finding new companies to recruit to the program, and Jenna Whitney, who runs the operations side of the program, which includes scheduling and finding sponsors for events like Brain Freeze Fridays, TGIFs for grad students, and so on.

The other thing that makes FoCS so successful and unique is that we are UT Austin. Our city is home to a massive amount of tech startups, and along with companies based in the West Coast, these companies are at the core of the program—because after all, the point of the program is to create relationships with companies we want to work for, and it turns out we really like working in Austin or on the West Coast. And while as of now there isn’t really a student-input component of the program’s application process, the FoCS team does a pretty solid job of finding companies we like.

The point I’m trying to make is that the FoCS program is more than just an acronym you see occasionally next to companies at the career fair. It’s a core part of the reason why UTCS is so great. It is a bridge to careers with many of the world’s most influential tech companies, and our strong ties with these companies is one of the reasons we’re so consistently rated as one of the best places to study computer science in the world. So next time you’re attending a talk or browsing around the career fair, keep an eye out for the companies with the FoCS pennant next to their names, because those aren’t just companies we want to work for—they’re companies who want to do everything they can to attract us to work for them.

Thanks to Brent Winkelman in the Office of External Affairs for the majority of the facts about FoCS provided in this article.