One of the first things most people hear about working for Google is that they have free, gourmet sushi every day for their employees. They also have a free laundry service, free massages, free shuttles to work from San Francisco (with WiFi), and free nap rooms. The workplace is more of a dorm than an office, and to most people that's enough to entice them to, at the very least, apply to Google for internships and full-time positions. 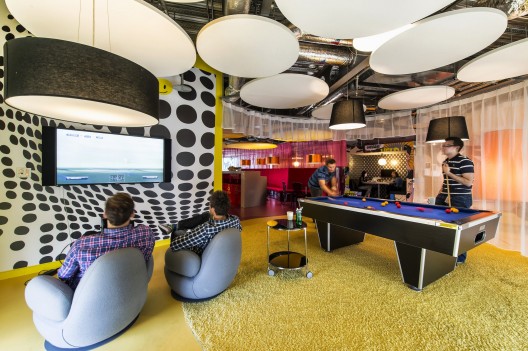 I personally can't speak for Google, but I had some insight into this approach a few weeks ago when I was in my last week at Bloomberg. Their New York office, which is a 55-story tower in midtown (whose top 25 stories are condos, one of which Beyonce and Jay-Z are rumored to own), has four massive pantries, which have possibly the widest collection of healthy snacks in the city, all for free for employees and their guests. They also have different gourmet soups and salads every day, and they have ice cream on Fridays (which certainly didn't help me lose any weight this summer, but that's a different story). There's also fresh fruit, a peanut grinder for fresh peanut butter, and about 10 different kinds of specialty coffee (including a weekly coffee imported from a different country, like Rwanda or Somalia). Which, to be fair, is awesome.

For the first week of my internship, I was in heaven. Free food in an area of town where the average lunch dish cost about $15 was a blessing, and I really took advantage of the amenities. The coffee was great for long nights (and coffee is often the difference between scanning 4000 lines of code fruitlessly and finding the place you spelled "dividend" as "divided"). The coffee was nice, but I never tried the vast majority of the snacks. The fresh fruit was delicious. Everything about the pantries was great. But maybe two weeks later, I stopped visiting the pantry as often, so I could spend more time solving the problems I was assigned.

Why? Because what made me excited to get on the subway and ride to work every morning wasn't the prospect of as much Skinny Pop as I could eat waiting for me on the 29th floor, it was the bug I discovered at 9:45 the previous night in my UI code. What drew me to work every day was exactly that—the work. Which was frankly surprising, considering that for the first few weeks, listening to stories from my friends at Google or Qualcomm (many of whose interns were put in hotel rooms instead of dorms), I was incredibly jealous of their working conditions. But when I realized that I was genuinely interested in what I was working on, it more than made up for all the free food and massages and nap pods I didn’t have.

So as career fair season starts up and we all make our way down to the Frank Erwin Center to hand out as many copies of our freshly-printed résumés as we can stuff in our padfolios to potential future employers, keep that in mind. Google might have nap rooms and yoga classes, Facebook might have an open bar in their offices (Ballmer Bash, anyone?), and Bloomberg might have enough healthy snacks to make anyone's mouths water, but remember that you're going to work not to get a massage or do your laundry, but to solve interesting and relevant problems, and to make the tech world a better place.