How To Not Get An Internship for Freshman (Part 2) 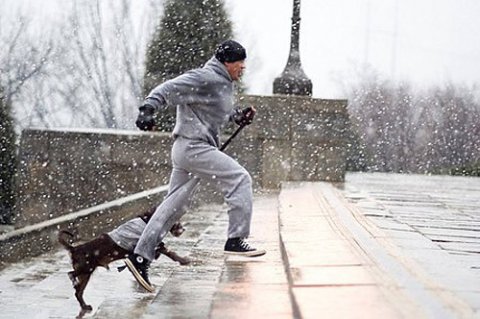 My fall semester failings at the forefront of my mind, I took time over winter break to think about what I did wrong and what it would take for me to finesse a job Spring semester. I decided to implement two common pieces of advice that I ignored before: apply everywhere, and practice interview questions. At this point, you might be thinking that this post will be about me embarking on a Rocky-esque montage of studying, applying to jobs, and running up the GDC stairs. Then, after intense training, I snag my dream job, the company's CEO personally congratulating me as I tearfully thank Gayle McDowell for changing my life. Fortunately for you, it's not.

Well, the first part is kind of true. While the majority of my winter break consisted of degeneracy, I spent a solid amount of time in my room studying, and by the spring career fair, I had done at least half the problems in Cracking the Coding Interview-- some multiple times. The "hella hard" interview questions I moaned about fall semester now seemed trivial. I was ready, all I needed now were some interviews. First, I indiscriminately applied to an obscene amount of companies-- like hundreds. A web dev company in rural Nebraska that builds web presences for tractor salesmen? I heard they have nice state parks in the midwest. I'd be down. Then, at the career fair, I skipped the "prestigious" companies and spent all my time talking to companies I knew would take freshman. After the career fair, I curled up in my bed, phone inches from my face, and continuously refreshed my inbox, waiting for the recruiter emails to roll in.

One month later, I had a total of two opportunities to interview, a less than 1% success rate for my applications. Whatever, that's fine. I would just study until I had a 0% chance of getting rejected. My first interview was with Company A. A week before the interview was scheduled, my recruiter informed me that I'd be speaking to a lead engineer about my resume and experience with JavaScript. No actual coding would be necessary. It threw me off a bit, but whatever. I closed Leetcode and opened up a few JavaScript books to refresh my memory, preparing to drop some sick vocab like "prototype inheritance" and "event-driven programming".

For the fifteen minutes leading up to the interview, I sat at my Jester West desk, despondently staring at my phone, contemplating the fact that I could only mess up once. The call finally came, and I prepared myself to be grilled on the difference between '==' and '==='. I was instead surprised to be greeted by a garbled voice that seemed to be coming out of an old drive-through order machine with an industrial fan in the background.

"Uhhh, yeah you're fine." I stupidly thought that telling him to readjust his phone setup would annoy him, hurting my chances.

"Ok grea-- PSHSHSHSHSHSHShhshshh -- I like to walk outside-- PSHSHSHSH --ile interview. Hope-- PhshsphsHSHSHS don't-- mind." After taking a few moments to piece together the sentence fragments, I realized my interviewer wasn't a drive-through cashier, but walking outside on a windy day with speaker phone on.

While I could probably only make out less than half of what he was saying, he seemed super friendly, excited about my side projects, and didn't ask me anything technical. The most difficult part of the interviewer was to keep myself from throwing my phone at the wall from the constant PSHhhhSHPphSHPSHSHsS in the background. He ended the interview by saying, "recruit-- PSHSHS --touch hsssPHSH --follow up interv--", I did a little fist pump for passing round one, and we exchanged goodbyes.

Two and a half years later, I'm still waiting for the follow-up. I emailed the recruiter twice. The first time was after two weeks. She apologized profusely for the delay and told me the team was under a lot of pressure at the moment, and she'd get back to me in a week. I checked in again after 3 months and received no response. Too prideful to double text, I moved on.

Though bummed out, I knew I had another chance, company B. Their office was in San Francisco. It had a meditation room, a ping pong table, and catered meals. I couldn't mess this up. I was going to be perfect.

The first phone interview was technical. I blazed through the question, surprising myself. I moved on to the next round, my bougie internship fantasies becoming more vivid. This round was a one week take-home coding challenge that involved building a web app. I dropped all other obligations and focused on building the most polished web app I could. I spent hours documenting, refactoring, making the UI beautiful, and was moved to the final round. An hour long technical interview in three days that would determine if I'd be eating Honey Nut Cheerios three times a day at home or living it up in San Francisco.

Thirty minutes before the scheduled interview time, I received a boilerplate email where company B said that they "loved getting to know me", but the spots were full, and I had been rejected. They didn't even give me a chance on the final round. I rested my cheek on my keyboard watching random characters fill up my blank CoderPad.

Sitting in the midst of successful people, especially during recruiting, often arouses a feeling of inadequacy or of falling behind. I usually judge myself based on results, not effort. So, even though my interview skills increased exponentially, I beat myself up over not succeeding at getting an offer. I started to look for what else could be wrong with me: was my voice too annoying? Did my emails to recruiters have too many exclamation points? Obviously none of those things really mattered, but I was desperate for ways to fix myself, to finally get what I wanted.

As summer neared, I got over it. People forget that getting an internship means you actually have to do work for 8 hours a day. Having no obligations is awesome. I had a memory foam mattress at home, the kind that contours to your body so you sink in as it engulfs you. I could hibernate for weeks on end. Besides, I'd be programming the rest of my life, a summer off is a good thing.

But then, a week or two into doing absolutely nothing at home, my brain slowly contracting as I forgot pretty much everything I learned that semester, a super accomplished friend from high school was able to hook me up with an interview at a startup. Despite being unprepared and out of practice, I got the job. It was surreal, and I didn't feel like I deserved it. However, I also didn't feel like I deserved the rejections earlier in the semester.

Through this ordeal, I learned that, occasionally, things are just out of your control. Sometimes, you put in a ton of time studying for a test, only to fall sick a few days before and make a C anyway. We've been taught from a young age that if you try hard enough, you'll succeed. The contrapositive of this is: if you aren't succeeding, you just aren't trying hard enough. This might be a good mindset to have in some situations, but it's important not to take it too seriously. Circumstance is a huge factor in success. Sometimes, you just get unlucky, and sometimes, you'll luck out. Don't beat yourself up over it, and in the long run, things will even out.