The Importance of Outreach 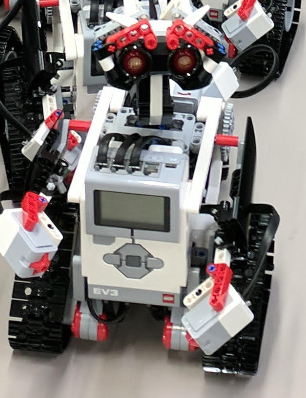 The Wall-E robots that we use in our classroom programs

I have always enjoyed helping others. There's something exciting about seeing the happiness on someone's face when you help them get through a really tough homework problem or give them advice for a tricky situation they're in. I especially like giving advice to people who are younger than me because I feel more qualified to solve those kinds of problems having already been through those earlier stages of life. When it comes to college student problems, I'm basically just guessing at what might fix the issue, but when it comes to middle school problems, for example, I can apply my previous experiences to figure out how to help. For this reason, one of the first things I did when I got to college was to explore the different ways I could help out with computer science outreach. Outreach was a logical way to combine my loves of teaching, giving advice, and computer science. My first semester of college was really busy, though, and so it wasn't until second semester that I joined the world of outreach because an opportunity just happened to fall into my lap.

That opportunity happened to be Coding in the Classroom, an outreach initiative meant to bring CS education to the classroom. Last semester, I helped out with an after-school program at Bertha Sadler Means Young Women's Academy, an all-girls middle school in AISD. We went to the school once a week after classes had ended and teached a small group of girls how to program using programmable cars. It was fun to interact with the girls, to talk to them about their lives and watch their faces light up as they talked about themselves, but the most rewarding part was seeing the attitude shift in some of them from indifferent to interested. As the semester wore on, a few of the girls got super invested in making the cars move, and they were very excited each time they were able to successfully tell the car to do something.

This semester, I've gotten to see even more of that as we've shifted from an after-school program to an in-class program. Now, we teach three classes of sixth graders how to code using Lego Mindstorms shaped like Wall-E. The girls' initial reactions to the Wall-E robots were really cute. They were so excited to make Wall-E move, and walk around, and walk in a path that spelled his name out. Their excitement to work with the robots translated into them solving more complex problems than the ones we had planned for them. It has been so exciting and rewarding to see their growth over just three sessions of teaching. Maybe some of their excitement comes from getting to work with robots during a time when they would normally be sitting in class doing math problems, but I think it also comes from seeing the real effects that their code can have on the robot. They especially love seeing just how fast and how far Wall-E can walk (which usually ends in me shutting down their robots, but that's okay).

The first time we went, it was heartbreaking to see how many of them didn't care about computer science purely because they believed that people like them (Hispanic girls) didn't belong in the tech industry and couldn't succeed. That, to me, is the most important reason why we have to keep bringing these computer science programs to schools. These girls had, before now, never been exposed to programming and the tech industry. They just assumed that they couldn't succeed because they had never been shown otherwise. But now, as they're learning how to code and they're seeing with their own eyes how they can succeed, they're changing their minds. They're realizing that they have more freedom to choose their future occupation than they thought they did. And even if they decide that they don't like computer science, I think it's important to give these girls the tools to make that decision.

So, anyway, there's my shameless plug. If you're looking for another way to use computer science to change the world, or if you just need something else to do that is related to computer science, or if you love teaching kids as much as I do, outreach is an excellent option. If this is a cause that's close to your heart and you don't have the time to volunteer, consider contributing to our HornRaiser campaign. If you want to help out, contact Alison Norman at  ans@cs.utexas.edu or reach out to me and I'll point you in the right direction. Another shameless plug: Hour of Code is coming up soon, so if you want a shorter term commitment that still gives you the same experience, you should sign up for that here.

Have a great rest of your week!