The Innocence of Youth 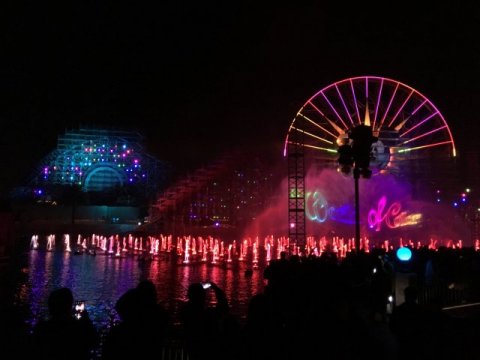 This was taken by me at the end of the World of Color performance at Disney's California Adventure Park. The performance used projections on water along with colored fountains and music to show the extent to which color is used in Disney movies and media.

Over spring break, my family and I visited Disneyland in California. You might be thinking that I'm a little too old for Disneyland, but I'd argue that you never can be too old; the experience just changes as you get older. When I was a younger child, Disneyland excited me because I got to meet all my favorite characters and go on rides that told their stories. Now, as a young adult, Disneyland was enjoyable for another reason entirely: I got to watch other little kids go through the same experience as I did, and I was reminded of how magical the experience can be for them. I watched young boys no more than three or four years old shyly hug Captain America, and I watched young girls call out to Black Panther as his entourage drove by. You can't quite replicate the fascination and excitement of a child meeting their role model or seeing fireworks for the first time or watching in awe as they fly over England in the Peter Pan ride.

I think, from all of this, I remembered another reason why I do what I do. Technology makes sense to me because I've spent so much time learning about and messing around with it, but for a kid-- or even an adult-- who knows very little about what technology can do, seeing it in action is awe-inspiring. A toddler riding the Little Mermaid ride will be completely thrilled by the surround sound and vivid animatronics that bring their favorite songs to life, and an adult watching one of Disney's fireworks shows will be amazed by the incorporation of fireworks, flamethrowers, water, color, and sound to put on a cohesive show. The kinds of things that we as computer science majors do helps bring smiles to these people's faces; it took an engineer to program those Little Mermaid robots and program the technology required to put on such an amazing fireworks show. Computer science brings smiles to people's faces through the various facets of entertainment, and I hope that my future career can do that, too. There's nothing more satisfying than the awe and happiness that your work can bring as it makes dreams come true.

I'm reminded of a few weeks ago, when Explore UT was taking place, and I was helping out at a robotics table. Even though the setting wasn't nearly as exciting or vibrant as Disneyland, I still got to see that same raw excitement and awe as kids and adults of all ages watched the robotic arm pick up objects or track AR tags. The younger kids were excited by just the pure movement of the robot; the older kids were curious and asked question after question about how the robot worked. The adults asked harder questions, of course, but among all the people I interacted with that day, there was the same underlying feeling that I experienced at Disneyland-- fascination with technology, awe at seeing something revolutionary and new, and this youthful excitement at what technology can accomplish.

Disneyland has a section called Tomorrowland. Most of the design of the area comes from your typical 1950s ideas of what the future was supposed to bring-- rotating satellite dishes, sleek spaceships, blocky robots, moving conveyer belts-- along with the themes of space travel, flying cars, and autonomous robots. The whole place has an ambience that encourages optimism about the future, boldness in pushing the boundaries of what technology can do, and general excitement at exploring the unknown. Most of the portrayals of futuristic technology are inaccurate and laughable, but Tomorrowland was and still is my favorite area of Disneyland. When I was a kid, I liked Tomorrowland because it was cool and new; now, as a computer science major, it reminds me of how I can make people feel with the work that I do. My classes might sometimes feel laborious and mundane, but one day, I can take what I've learned and create something that makes kids and adults alike feel the same way that I once did while running through Disneyland as a kid, begging my parents to stay in Tomorrowland just a little while longer.