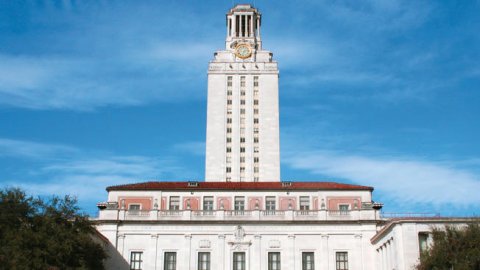 The first word someone said to me in Austin was "howdy". He was a mustached man in a white dress shirt tucked into Wranglers and a cowboy hat with matching boots. I like to imagine he was chewing a piece of straw or a toothpick, his horse parked outside, spittoon hidden in his carry-on.

At my Northern Californian high school, no one ventured out to Texas for college. No one really even knew what Texas was like. Our views shaped solely by television stereotypes, my friends expected me to come back in overalls, having traded my guitar in for a banjo and having switched majors from computer science to cattle herding. The teasing didn't faze me though, because I, after reading tons of forums online about how liberal UT was and how hippie Austin was, fully expected to be met at the airport with a drum circle, Green Party bumper stickers, and celebratory beads. That is, up until that "howdy", which fazed the hell out of me.

My thoughts then went from, I wonder who I'll meet at orientation, what classes I'll end up taking, what Jester will be like, to Oh god am I going to look out of place for not dressing like Woody from Toy Story? I should've listened to my friends and packed some dip in my suitcase.

Thankfully, the first few minutes of orientation showed me that UT wasn't the set of a Western, but this surreal experience was the first in a long line of shattered expectations, and for someone who anxiously over-plans, takes forever to adapt, and daydreams future days to the littlest of details, this unpreparedness terrified me.

The first unexpected problem was my nearly non-existent ability to befriend strangers. The fact that 80% of these strangers were from Texas didn't help. They strolled in decked out in burnt orange, already knowing the "Eyes of Texas", which organizations to join, and where to live. Many came from popular high schools, and for them, campus was already populated with friendly faces, and the sea of grey New Balances and Wranglers and Nike shorts and oversized t-shirts were no surprise. That isn't to say people weren't warm-- they were mostly great-- but being even more awkward and gangly than I am now, I found it impossible to connect with these people who seemed so different than me, who I haven't been influenced by and influencing and learning to get along with for the last twelve years, this same fact not stopping them from meshing with each other so well, like nothing had changed, amplifying my own strangeness.

As the semester went on, they clustered into groups while I watched, my face pressed against these impermeable bubbles, trying to peer in for a hint as to what I was doing wrong. My loneliness grew. It grew as I thought back to high school, as those in the grade above us returned from college like Cabeza De Vaca with crazy stories and promises of life skyrocketing in quality and I went to sleep fantasizing about this upcoming golden chapter of life. It grew as I went home after finals, and my parents' friends, with a nauseating enthusiasm, said things like, "So how's college? Isn't it amazing? I'm SO jealous, I wish I could go back. Really the best four years of your life! Savor it!" and I briefly thought back to my last Friday night-- when I sat on my stained blue mattress, continuously refreshing Messenger, hoping my lack of responses was a symptom of WiFi issues and not some sad secret I'd never understand, eating unhealthy amounts of Gummy Vites, scrolling through Snapchat, addicted to what I was missing out on-- before reciprocating their ear-to-ear smile and regurgitating the three fun things I did in the last three months so as to not be a downer.

The feeling only slightly relented over winter break, when I returned to my expectation-less hometown, to the love of my parents, and to friends I truly valued, rediscovering all of my incredible privileges and blessings. I hid this feeling of relief as my friends, like those in the year before us, enamored with their new lives, pined to go back.

I persisted in my efforts to find "my people", making conversation with strangers in dining halls while trying to mask my desperation, only to have the acquaintanceships fizzle out due to their contrived beginnings. I played board games and withstood lame icebreakers at club meetings, leaving just as anonymously as I entered, learning nothing about the people I had just interacted with for an hour aside from Jenny being allergic to watermelon (two truths, one lie) and Sam being an awful liar (mafia). If it weren't for the two friends I had coming into UT, an incredible stroke of luck, I could've easily gone weeks without any substantial conversation.

I wrote off the next three years as a waste, restlessly waiting for the next, hopefully better, fearfully worse, stage of life.