I remember staying awake until 4 AM in high school talking to my best friend about an essay that we were both freaked out to write the next day in class. It was a weeknight, and for some reason, we had convinced our parents that a sleepover would be a good idea before our slow death on lined paper the next day. When she fell a chapter behind in math, I could always show her a few concepts she’d missed in class, and in a few hours we’d be on the same level again. And when we came across some long forgotten allusion in one of the books we had to read, we could both Google it and learn something new between classes.

But going back during winter break was different. We spent a few days talking about what we’d missed out on in each others’ lives, pictures and all, but at the same time, it was impossible to completely describe the things that the other person hadn’t been there to experience. And it occurred to me that as the choices I make render my life more specific, I will have a lot less in common with other people. 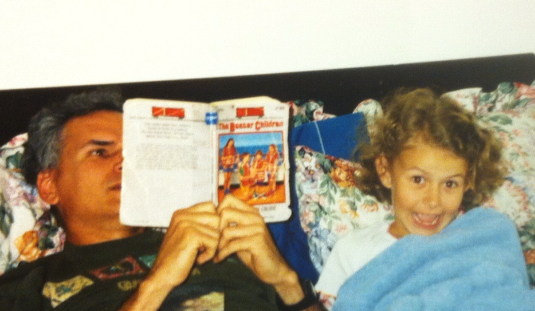 But then I thought of my dad. He’s an aerospace engineer, so for most of my life I just imagined him flying a spaceship around like he was playing some kind of video game in his office for eight hours a day. But I’ve never found him hard to communicate with, or thought that he didn’t understand me because he was too “specialized” to talk to a kid. Rather, my dad understands me because we have the same guiding principles and thought processes. Not because the specific facts we know are the same.

And as I think about the big picture of what I’m learning in college, I’m less afraid to be too unique. While Intro to Computer Science was a class about memorizing Java syntax on one level, on a grander scale, it was about breaking problems down into smaller, manageable steps and tackling those. When I get involved with research, I will be learning about specific details of complicated problems, but in a more general sense, I will be learning how to ask good questions, and use the tools that are available to me in the most beneficial way. These are things that everyone will be able to relate to.

And while embracing our sui generis perspectives isn’t always easy, its benefits make it well worth the effort. After all, computer science wouldn’t be what it is today if Charles Babbage hadn’t realized that his mechanical interests had mathematical implications. Furthermore, some of the most groundbreaking work today exists because people of different fields were able to come together despite their different training – just look at the strides we’ve made in medicine by incorporating technology, for instance.

So you don't have to see yourself as a computer scientist. Try seeing yourself as a human being whose knowledge is a unique set of tools. I’m certain that these tools are much more useful when they’re not restricted to the bubble of the Gates Dell Complex.