My Day With Richard Tapia

This past Tuesday I had the distinct honor and pleasure of spending much of the day with Dr. Richard Tapia for his visit here at UTCS.  From lunch and an afternoon roundtable discussion with ELA members to his lecture in front of a university wide audience, Dr. Tapia spent the whole day talking with students and professors over various topics concerning diversity and college readiness. For those of you who aren't familiar with the story and legacy of mathematician Richard Tapia, his tale is a classic example of a man with little overcoming the barriers of society and excelling beyond expectation.

Born and raised in the barrios of Los Angeles, Tapia was raised by hard working parents of little education. However his parents' emphasis on education laid the foundation for Tapia to succeed in the years to come. With a natural gift in mathematics he was encouraged by a series of mentors to go on and receive a university education. Dr. Tapia eventually attended the University of California Los Angeles (UCLA) after undertaking two years of community college and finished his bachelor's degree in five years. From there he received his masters and Ph.D. from UCLA, eventually taking on a professorship at Rice University and received tenure in two years. Despite personal hardships that he encountered within his immediate family, Tapia continued to succeed in the field of applied mathematics by going on to win countless honors and awards ranging from several honorary doctorates to the National Medal of Science awarded by the President of the United States.

However, one of Tapia's biggest legacies, and one that continues to resonate among all students in the field of computing, is his fight for individual opportunity and equality for underrepresented groups in the STEM fields. From his involvement at his home of Rice University to spreading the word of his initiatives at college campuses across the US, his work along with others in the field of computing is culminated every year at one of the conferences for his namesake, the Richard Tapia Celebration for Diversity in Computing (in which UTCS each year sends a group of students to attend). 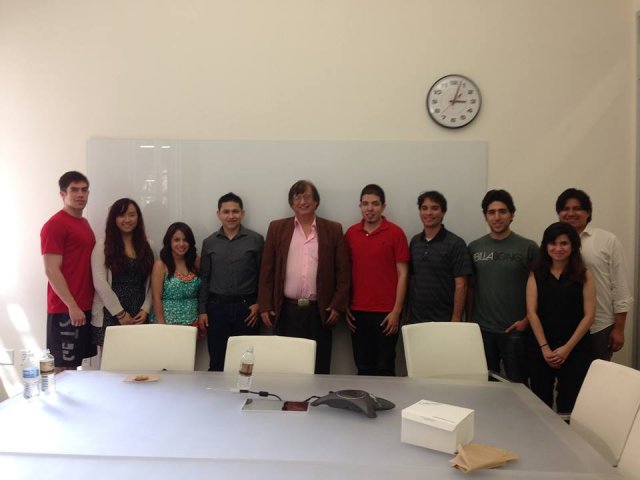 Prior to Tapia's visit to UTCS, I was well aware of Tapia's work and message.  Coming from a diverse background of Asian, Hispanic, and White ethnicities, the ideas of diversity and inclusion are concepts I hold close to heart. As Dr. Tapia lauded the computer science department at UT for its leadership and initiatives toward empowering underrepresented groups, there is always more that can be done. However, while the disparities in representation still exist in computing as a whole, I can proudly say that the computer science department here at UT is one that fosters the individual and provides students with opportunities to pave their own route to success regardless of their background—be it academic, socioeconomic, or racial.

After having the opportunity to spend the day with Dr. Richard Tapia, my admiration for him grew even higher. It was a true honor to spend time with a renowned researcher and scientist, but it was an even bigger pleasure to get to know a true champion of diversity.

Great article! Anyone that could accomplish what Tapia did even without the challenges he faced is pretty remarkable. He really embodies his own message.