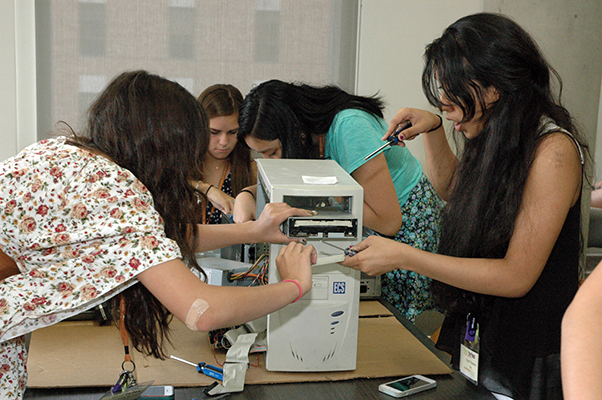 It’s wonderful to see familiar faces this fall, as girls who were formerly First Bytes campers are now undergraduate computer science students. Two summers ago, I was a counselor for the program, and while the constant activities and noise did leave me completely sleep deprived, it was also a blast getting to help out and learn from the other students, faculty, camp coordinators, companies, and of course the campers themselves that took part in making the week such a success.

First Bytes is a week long summer camp held each summer here at UT designed to get high school girls interested in majoring in computer science. Not only has it proven to be effective in increasing our numbers, but it also introduces people to computer science in a way that is effective.

What do I mean by effective? I mean that instead of joining the “Computer Science” Facebook group that we have and getting all of your information through snarky and often less than serious channels (I hope…) like I did, I see these new students participating through organizations like Women in Computer Science, Mobile App Development, and HackTX that they will get a lot out of.

This is excellent, and I think that it reflects the extraordinary amount of thought and compassion that people in this department put into making us more inclusive.

Google sponsored another program here where members of the UTCS community worked towards encouraging accomplished young women to join our program. While a wide variety of ideas for making our department more inclusive were discussed, one in particular was to make phone calls to accepted students and explain to them what an incredible door they had opened for themselves by applying and getting in to this program.

I have no doubt that such a phone call would have been well received by me as a prospective freshman. It is definitely a confusing process to figure out where you should go to school, and where your time, effort and money can be best spent!

We certainly do have a long way to go with regards to inclusion, though, and this will likely continue for a long way into the future. It can also definitely be discouraging to hear that despite the many programs that now exist to encourage women to major in STEM fields, our numbers are still dropping in computer science.

That being said, our efforts are not for nothing. For me, First Bytes has been a clear sign of the difference we can make. For those of you who have not seen this for yourselves yet, keep mentoring and encouraging others. As computer scientists, we are problem solvers and brilliant people. Add compassionate to that list and you’ll see that each one of us has a role to play in inviting others to become the same.