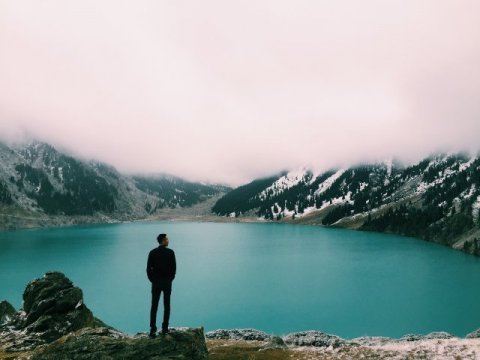 When I came to college, I didn't really come with much passion for CS. Sure, I came in with a lack of clarity in what the future held and a bright amount of curiosity as a freshman. I had a far-reaching desire outside of class to try out new things, scour the school for free food and shirts at events, and traverse through many different orgs surrounding the inner campus. But when it came to programming, I had considered it more of a matter-of-fact chore to do. Having taken CS classes in high school, I assumed much of programming to be self-explanatory. I believed things would happen in college naturally like in high school, and I wouldn't need to worry about it much. I could refactor my brain easily to whatever challenges I had to face.

When I reached my first semester of my Sophomore year, though, I was overwhelmed. I thought all I had done before that was survive, but in that single semester, I was really pushed to my limits in my abilities. Spending 40+ hours a week waking up for class, finishing projects in 3-8 hour meetings, and juggling several other orgs and activities I was a part of, I was exhausted from my 4-6 hour sleep schedule. I found myself genuinely struggling to get by many challenges daily, and in doing so, I found that I lacked so much knowledge in programming. To find that I had barely understood a cup, if not a drop, of that sea of CS knowledge, really brought me to a dry wasteland in my thoughts.

"How did I come to this predicament? Why did I lack knowledge?" I wondered.

I discovered without much thinking, that the cause of my predicament was for what I strived for. I strived for grades; alphabetical and numerical values that would prove my self-worth. I had factored my mind to a system that was on a completely wrong basis and was never supposed to be in my favor. Grades lacked real foundation in proving anything if no learning comes from it. I realized I had come to college with the wrong mindset, and that I had never really thrived in the major I was in. It devastated me to know that I had wasted more than a year of college.

I wanted to change.

This past 2nd semester of my 2nd year, I've found that I've changed a lot. Having the privilege to be a writer for UTCS these past 2 semesters has really helped me understand more of who I am (especially for hackathons). Additionally, I've really been blessed with opportunities to proctor for a class of one of my favorite professors, as well as be a part of an organization that helps prepare for hackathons for UT. Though I still have a tendency to try to do well for grades, I know that there is a deeper motivation behind that surface level intention of grades. Rather than allowing myself to focus on the aspect of grades, I try to shift my gaze rather to the aspect of learning and teaching others what I learn.

Of course, there are many flaws that I have, and I'm still learning the basis of why I pursue many things, such as writing, teaching, proctoring, or doing hackathons. But I know that through it all, as long as I check the heart behind the intention of what I'm doing, and I learn from the failures that I encounter through wrong events and actions, I know I will not stray far from why I am actually doing what I'm doing, and in the future I will really be pursuing something that is worth living for.