Remembering a Legacy and Ushering in a new Era

I remember my 2011 freshman orientation like it was yesterday. It was extremely hot, crowded, and I was uncertain about the year ahead. My original academic hopes of getting into the Cockrell School of Engineering did not come true, and I was enrolled in my back up choice of chemistry in the College of Natural Sciences. Although I had admiration for the subject of chemistry in high school, my time in a computer science course in my last year of high school produced fond memories, and I knew I wanted to continue my focus on computer science into college. After being directed to the computer science academic office, my first encounter with UTCS was with advisors Mary Stinson (then Beringer) and Rob Poynor. With their guidance and patience I was able not only get into the CS department but also the CS FIG program (a first year learning community for incoming freshman, now known as the CNS101/POD program). It was a start to a great relationship with the advising office that I hold dear to this day.

This past year has presented a great deal of changes here on the Forty Acres: from a new system chancellor and the university president announcing his resignation to a new football coach. But there have been big changes that have hit closer to home, specifically in advising. This past summer we lost two popular members of our UTCS community, Rob Poynor and Mary Stinson, to other roles on campus and family respectively. However in the past year we gained two new advisors, Morgan Booth and Doug Roberts, who have started and will continue to bring great changes to the department. 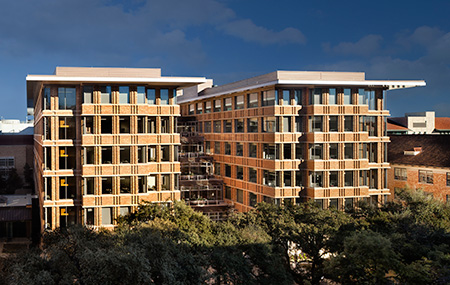 I had the opportunity to sit down with Rob, Morgan, and Doug individually, for a time of reflection, remembrance, and hope for the future.

From his entrance into the department in 2009 when CS undergraduate enrollment was only 850 students strong and the department home was Taylor Hall , Rob Poynor has been a presence and guide to students, faculty, and staff in our department. Motivated by a college advisor and professor  during his undergraduate career at the University of Arkansas, Rob was inspired to serve in academia. From "smiling, laughing, and accomplishing great things" with the CS faculty and staff to working with students that he characterized as a "collective group of people so good from top to bottom," Rob reflected his time in UTCS as some of "the best times in his life." Rob left the department this past summer for a promotion within the College of Natural Sciences as a coordinator.

Through my experiences with Rob from advising, the FIG and CNS101/PODS, and the Tapia Conference I was fortunate to get to know Rob and admire the way he served the UTCS community day by day.

As advising staff has changed greatly this past year, we welcome in some new faces that have hopeful plans for the department in years to come. With the return of Peter Guzman, advising also welcomes two new faces: Morgan Booth and Doug Roberts.

Morgan joined the CS advising team this past semester upon the departure of former CS advisor Gina Higby. In her tenure as an advisor, Morgan describes the CS community as a "perfect fit" for her. In addition to performing undergraduate research within the area of career counseling Morgan's memorable times in her undergraduate career as an orientation advisor and FIG mentor motivated her to develop a career geared toward serving students. Along with serving a booming CS student population of 2,150 strong as an academic advisor, Morgan is also finishing up her Master’s in education to further her skills in higher education. While hoping to continue the legacy of the previous advising staff, Morgan has plans to take a proactive stance on how advising works in UTCS in order to better serve students. With an emphasis on engaging students from the time they walk into GDC, Morgan plans to follow the trends of the different "clusters" of students. With the focus of the POD program and surveys, she hopes to create a culture among classes and create a presence of advising to the students so that advising will not only be able to connect with the student body but also ensure that the right courses will have the appropriate amount of seats.

While sharing similar ideals to Morgan, Doug joins the advising team with a proactive approach as well. A UT alumnus, Doug brings a wealth experience from his time with the registrar's office, the FIG office, and as an advisor in the School of Human Ecology. After a tough experience with an apathetic advisor in his undergraduate career, he was motivated to serve students for the better. Upon his arrival in UTCS, Doug has the goal of continuing the legacy of the past while paying close attention to the first year experience of a UT Computer Science student. In particular, Doug hopes to have the POD program have a corresponding class associated with the seminar, similar to how the FIG program operates. Additionally, he hopes to work with the CS advising team and faculty to create the first CS subject based UGS signature class (the undergraduate studies signature course is a required class for all UT students). With that goal, Doug plans to ensure that all future first semester freshman will have the opportunity to sign up for a UGS course at orientation. Overall, Doug has described the CS faculty, staff, and student population as "friendly and brilliant minds" that he expresses excitement to work with in the years to come.

It was a true honor to sit down with Rob Poynor, Morgan Booth, and Doug Roberts—from sharing great experiences with Rob to admiring the goals of our new advising staff. We as a department are lucky to have such personalities serve the UTCS community for the better. I highly encourage everyone to reach out to advising beyond the regular coursework and degree planning. From a personal perspective, I am happy to call the CS academics office a partner not only in my education but a second home.