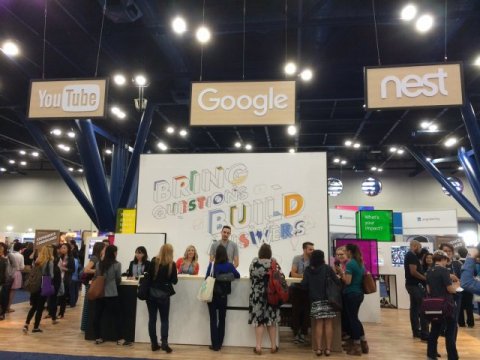 Career fairs remind me of animal courtship displays. Companies and students put their best foot forward; one side tries to dazzle with tantalizing job opportunities and the other with shining intellect. Recruiters reel in potential employees while students fish for the right words to string together into intelligent conversations. The ultimate goal? Employment.

I have been to three College of Natural Sciences (CNS) Career Fairs at the Frank Erwin center. By now I have acclimated to the scene, but I will admit that I am always faintly overwhelmed by the sheer number of companies at the event. However, after several minutes my sense of ease returns and I am comfortably traveling up and down the aisles of booths swathed in blue velvet. Sometime, I even recognize the familiar faces of recruiters from past career fairs and events. It’s strangely routine even though CNS career fair only occurs once a semester. I had assumed that all career fairs were like CNS Career Fair. Of course, I was totally wrong. 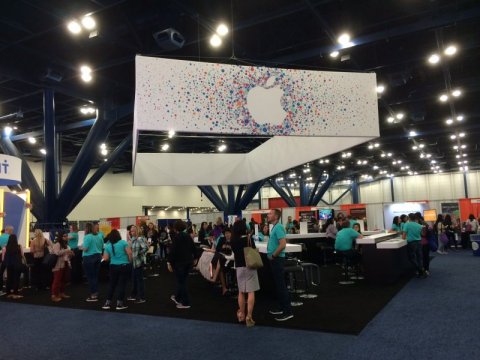 The 3-day-long career fair at the Grace Hopper Celebration of Women in Computing (that I had the privilege of attending last week) is a career fair on steroids. Forget mundane booths. Imagine twinkling lights, giant structures hanging from the ceiling, and chic couches and potted plants everywhere. Companies had forgone the traditional monotony of tables in favor of tall structures made of bright and bubbly colors. The whole room was a crazy mix between a museum, a contemporary art exhibit, and a playground: A visual feast.

Needless to say, companies came equipped with their coolest “swag” (Cisco took the prize by bringing a machine to custom screen print t-shirts for the attendees).  As CS majors, many of us have probably gotten accustomed to being wooed by companies and having free stuff showered on us 24/7. I wouldn’t be surprised if several of us have made at least one career fair into a twisted game of how-many-t-shirts-can-I-get? I see the appeal of amassing mountains of “swag.” I will admit that sometimes I do enjoy accumulating enough t-shirts to clothe a small nation. Moreover, companies actually do want us to take their stuff. However, that’s not really the point of career fair.

Career fairs are places to ask questions, discover new companies, make connections, get career advice, and hopefully secure that dream job you have been daydreaming about. The wealth of a career fair resides in the people that attend it: both the job-seekers and job-givers. There is so much experience spread across such a broad spectrum that it would be a shame to not make use of it.

As someone who is a huge supporter of having quality conversations at career fairs, some of the behavior at the Grace Hopper Celebration (GHC) Career Fair appalled me. When the doors to the room were opened on the first day, I felt like I had been thrown into a jungle of savage creatures. Honestly it could have been a strange new reality TV show: “Presenting Season 1 of Swag Hoarders!” Small throngs of people were rushing around with no other purpose than to stockpile swag. I witnessed attendees walking up to displays and swiping several pairs of sunglasses or sheets of stickers without making any effort to talk to the company representatives. Several times when I was standing in line to talk to an engineer, I got shoved or bumped by people who just wanted a t-shirt or tote bag. Perhaps the worst was when an attendee would wait in line to straight up ask a recruiter if they could have some swag. I thought it was incredibly rude. Rude to the companies, rude to other career fair attendees, and rude to the people who had organized this amazing opportunity.

Not everyone was like that. The majority of the people were being completely decent and putting their time to good use. But there were just enough people, conducting personal conquests of shameless swag acquisition, to make me cringe. Honestly, I didn’t understand the behavior. Perhaps they just valued free things over a chance to learn something more about their field or be employed. Perhaps they did not understand career fair etiquette.  Perhaps they did not know how to work a career fair because they had never attended one before. Perhaps they didn’t believe that they had a true shot at getting an interview so they had resigned themselves to amassing swag. None of those options really excuse the rude behavior. 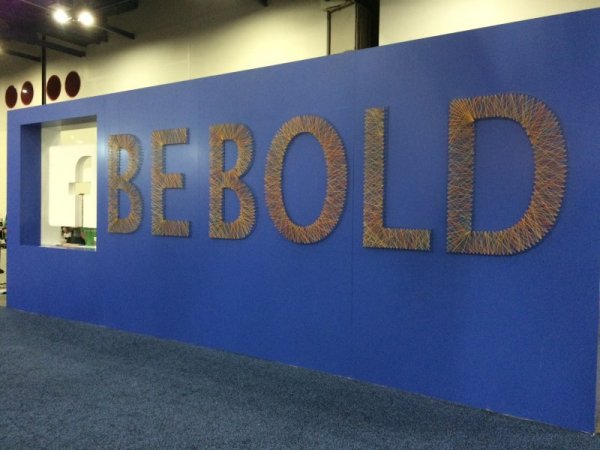 Maybe I am overreacting because all the company representatives seemed perfectly content to hand away their swag as quickly as possible. However, in my opinion, when you start prioritizing all the material gains at a career fair over its true purpose then you are abusing the opportunity.

I will note that I am no saint. I do think some companies have really cool swag, but that doesn’t make me devolve into mindlessness. I always make sure to be on my best behavior and recognize that each person at the fair might have valuable advice for me.  If I start talking to a recruiter and realize I don’t really care to work at their company, I quickly steer the conversation into the realm of more personal questions: Why did you choose company X? Did you work anywhere before company X? How did you end up in this subsection of the field? Why do you like this subsection of the field?  I’ve found that questions that are not specific to the company are incredibly useful in helping me navigate my own future in computer science and tech. I make sure to ask every recruiter and engineer these questions because they help me figure out the answers to broader life questions. Those are also the kinds of questions that are more likely to lead to meaningful connections and potential mentors if you are looking for them.

Thinking about those people at the GHC career fair still rubs me the wrong way and I’m very thankful that I have never seen people act that way at our CNS career fair. However, it was a great reality check for me. It was a reminder of the true spirit of career fairs and the value of any company-sponsored event.