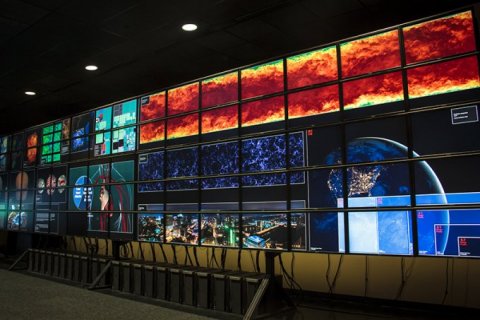 I know we're in the midst of a lot of people's midterm week and I can already feel the despair oozing out from everyone. I know this major can sometimes feel like it's way too stressful, especially in these coming days, with all the projects due and tests to take. And with all the stress comes all the doubts rushing in. I know I for one think a lot about whether computer science is the right major for me at all when I'm too stressed about computer science to be excited by it, or I can't seem to get something right that everyone else seems to be getting or some other such trivial thing that sends me down a dark spiral of angst and existentialism.

Today I, and consequently you too, dear reader, are going to get excited about computer science again.

So, for this week, I wanted to spotlight an incredible facility that is not only on campus, but is also just a stone's throw away from the GDC. The Texas Advanced Computing Center Visualization Lab, or just fondly termed Viz Lab, is located in the POB (room 2.404a) and allows anyone to schedule a tour to learn all about its services and functions.

I myself went down there last week and was immediately blown away at the virtual reality, all the experimental technologies, and the 328 megapixel display system which can show everything from weather and disease patterns to van Gogh's Starry Night down to its cracks. There was also an interactive multi-touch display system that had the blueprints of the Batmobile you could draw on, over which I went completely giddy.

So if you're looking to get some excitement over tech back, I highly recommend scheduling a tour and taking a look around this place and I promise you will not be disappointed.

I know first hand that it doesn't feel so great to have to question what you're doing and whether it's the right choice for you, career-wise, feelings which tend to come up a lot during these times, but it happens to everyone and it happens a lot. And if you're looking for a cure, I think the number one trick to combat those feelings is to go after things that excite you and inspire you and make you think.