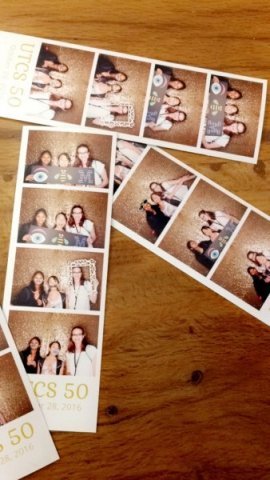 Fun times at the photo booth!

Hello, dear readers! This week's blog is going to be all about the UTCS 50th Anniversary Celebration that took place last Friday, an event which I sincerely hope all of you got to witness, but if not, never fear, for I hope you can live vicariously through these words.

It started with a bang at the symposium, from morning to afternoon, where lots of   very cool people gave talks about lots of very cool topics, about almost all the fields of computer science you could possibly think of. I caught the ones on the effects of artificial intelligence, new developments in cryptography, computer science in government and public policy, computer graphics, and also listened to a panel speak on what exactly it was that made Austin such a hub of technological opportunities.

Every one of these talks was so amazing in that I really got to see how much variation there is and how many different paths there are in the single field of computer science. I couldn't believe an expert in high level cyber security had taken the same major in college as someone who worked on 3-D printing, or even as the Chief Technology Officer of the United States. If you're struggling to feel excited about computer science again, or don't particularly know which specific field might be right for you, these talks were monumental in inciting passion.

And I for one was extremely glad to have gone because it's really exciting to think that I might actually have an idea of which field I want to end up in. Hearing the CTO talk about how important it is to have experts in computer science advising high level government officials in making policies and affecting change for your community was very enlightening for me.

In the evening came the 50 Fest, half of which had a ROCK CLIMBING WALL and the other half of which was basically just a GIANT ARCADE ROOM. The photo booth and hilarious props, courtesy of IBM, were great fun, and the mega size games of Jenga and Connect Four were just the icing on the cake. And of course one wall was eternally lined with Tiff's Treats for the whole night.

This event was a really great experience for me for getting to hear all the amazing talks about such vastly different topics. And of course, the getting to let loose at the Fest afterwards was greatly appreciated to!