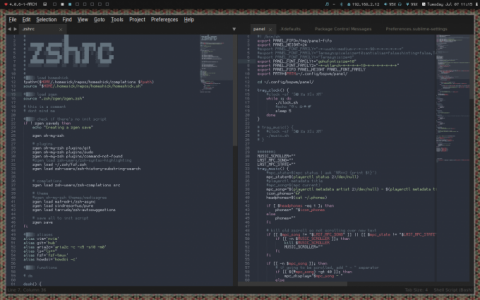 For the last six years, I've been using BSPWM, a window manager for Linux, along with a variety of impractical operating systems and terminal based tools. Among other consequences, my laptop screen constantly looks like a scene from CSI when they have two people on the same keyboard with green text flying across the screen in an attempt to "hack the mainframe", and I look like a nerd.

Aside from the unfortunate aesthetics, the set-up is annoyingly time-consuming. Not in a productive or rewarding way like how a difficult class is time-consuming, but time-consuming like how doing taxes with a pen and paper is time-consuming. When I first came to UT, it took me hours to connect to the utexas wifi with my barbaric CLI tools. If in my will, I implore my future kids to watch time-capsuled video saved on my laptop about how much I love them, they probably wouldn't be able to even open the file manager. In particularly dreadful circumstances, I'll show my laptop to a professor or TA trying to present an error message on my 13" display with the tiny monospaced font that is the likely culprit of my nearsightedness. They ask, reasonably, if I can make the font bigger, and I have to pray that whatever haphazardly assembled combination of obscure terminal emulators and poorly supported third party extensions will pull through in performing this basic task. It usually doesn't, and they realize, and I re-realize that I have spent 4 years working towards a computer science degree but can't change my font size, and we then have trouble taking my question seriously. Worse is when there's someone authoritative breathing over my shoulder, an evangelist at a hackathon, for example, doling out instructions on how to use their API, watching me flail around as they wonder why I can't resize the window of a Java applet.

And this isn't even that bad compared to what I put up with high school, when I, with too much free time and too few friends, thought it'd be "fun" to install Arch Linux, a minimal Linux distribution that requires a solid knowledge of system internals and diligent package updating. It took me 2 days to get English characters on my screen and another week to get audio working.

I'm sure there are tons of happy users using strange operating systems and stranger window managers. There are people who use Gentoo, and have to compile every software package they download themselves, and people who build their own Linux. I am not one of them, and struggle with everything from changing my screen brightness to ejecting a USB.

Why, then, would I do this to myself?

There's something satisfying about using something you created. I drank out of my deformed, leaky, ceramic mug I made in a free ceramics workshop until it shattered. For the final project of my high school woodshop class, I clumsily cobbled together a coarse, oversized, pen, and used it until it ran out of ink. In those periods where I lose focus on a task requiring some tool I made, when I start absent-mindedly spinning that blocky pen around my thumb hoping I don't get any splinters, my mind will drift to appreciating that tool, however trivial or unnecessary it was, and I'll feel a tinge of accomplishment. Yeah, I'm still several thousands levels of complexity away from "creating" the computer I'm typing on, but I did have to write my own scripts to change the screen brightness or hibernate when the lid is closed or display battery and volume information. And so, when I'm bored in class, fiddling with function keys, I'll feel that same tinge.

Is it worth it? Most definitely not, but I've put so much time into this horrible configuration that "how to fix laptop black screen" will stay permanently in my bookmarks.