My classes, and probably yours too, are probably getting pretty tough right now. You may have just started in CS, and are wondering if there is any way you will ever get through the rest of the major, especially considering the rumors that float around about taking operating systems. Or maybe you’re in high school, reading over the course list that you’ll have to take if you decide to come here for college, and don’t recognize half of the words it contains. I don’t want to define a ton of ways to be uncertain, but do want to bring up the fact that nearly everyone is anxious about something right now.

This morning, I woke up to a notification from my phone. The email was from a recruiter from a company I was interviewing with, and the subject line read “Thanks from <company>”. 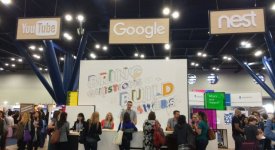 Career fairs remind me of animal courtship displays. Companies and students put their best foot forward; one side tries to dazzle with tantalizing job opportunities and the other with shining intellect. Recruiters reel in potential employees while students fish for the right words to string together into intelligent conversations. The ultimate goal? Employment.

Consider the following problem: given a particular Shakespearean work, rewrite it entirely using nothing more than the 100 most common words in the English language.

And now for something a little different: let’s talk about version control.

Let’s say you have a file—an essay, maybe, or a spreadsheet—that you edit a lot. You want to make sure that you always save your changes to the disk, so that when you update something the file reflects that change. Pretty obvious stuff. 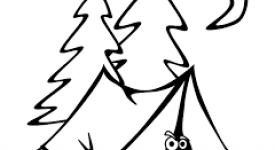 This week, I’ve decided to be adventurous and adopt the nomadic lifestyle. The nomad is a member of a people or tribe (read: tribe CS major) that has no permanent abode (read: I only go back to my apartment to shower and nap) but moves about from place to place (read: company events), usually seasonally (read: around career fair time) and often following a traditional route or circuit according to the state of pasturage or food supply (read: free pizza and Tiffs Treats).

When I was a sophomore in high school, I wanted to get involved with biology research. So I found a professor who was working on something I found interesting, reached out to his lab, and asked if I could do an internship there for a summer. Turns out I couldn’t—I was 15 at the time, and regulations dictate that anyone touching the lab equipment has to be at least 18 years old (or, in very special cases, 16 with a boatload of waivers signed). So research that summer was a no-go.

There's a lot of talk about computers and science and a mix between the two in the halls and classrooms of the GDC. And that's expected, computer scientists will naturally talk about computers and the science surrounding them. But at some point, people started talking about social issues, particularly those of inclusion, and even after a number of great programs have been put in place, it's seems that sometimes we still shy away from the discussion. 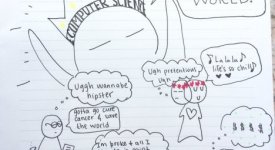 Let me explain how my life is going- I am drowning in a sea of schoolwork. Literally. The other day I woke up with Hindi vocabulary flashcards under my pillow and Operating Systems notes tangled with the quilt at the foot of my bed. Hence, literal drowning. That same day, I made it halfway down the elevator before I realized that I had my TI-84 in my hand and not my phone.

You might want to call me a nerd at this point.

I kind of want to call myself a nerd at this point.

When I look back on something that I’ve done that I’m proud of, I usually do a little involuntary post-mortem exercise involving a series of simple questions. What did I learn from this? What did I wish I’d learned? How would I do it differently given the same opportunity? And among more specific questions, why did this work out for me? What were the things I did? The places I went? But most importantly who were the people involved? As much as I’d like to think I've created my opportunities all by myself, I know that I only occupy a tiny sliver of the pie chart of reasons for my success.