A Computer Science Student Without a Computer 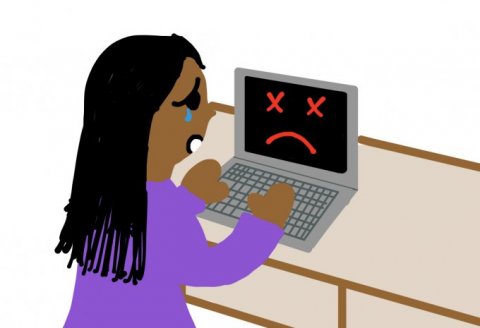 As the title suggests, I was met last week with the unfortunate reality that my computer, after six years of chugging along, had finally met its demise by my hand.

Yes, you read that right. I killed my computer— accidentally, of course. Last week, on Thursday, I decided to try and update my computer’s operating system. My computer was dual booted to run two operating systems, Windows and Ubuntu (I can feel the judgment already). I was trying to update my Ubuntu operating system to a newer version, but for some reason, it wouldn’t allow the update to occur because I had non-native packages installed. In the process of deleting unnecessary packages from my computer, I somehow managed to delete a vital package. Suddenly, there was no way for me to close any of the windows I had open or to switch between windows, and the keyboard wasn’t responding. Deciding there was nothing else I could do, I restarted my computer, but now, I couldn’t even log in to Ubuntu. Even after opening a terminal, I was unable to fix what I had done.

So naturally, I decided that the next step was, with nothing to lose, to wipe my Ubuntu partition clean and install the Ubuntu update manually. I made a bootable USB drive and began the installation, overwriting the Ubuntu partitions. However, when I restarted the computer, the bootloader couldn’t find my Windows partition, nor could it find my newly installed Ubuntu OS. Panicked, I tried to restart my computer without the USB drive, and I was met with a terrifying sight— my computer couldn’t find any operating systems. I had lost everything.

The first lesson you learn as a CS major is that you want to save backups of your backups of your work. Well, I hadn’t followed this basic piece of advice that I had heard echoed over and over again. I hadn’t backed up my files in over a year, and I hadn’t even backed up all of them at that point. I had no idea how many things I’d lost with my hard drive in such a dubious state. I spent about four hours frantically trying a different combination of tactics to revive my computer to its former state, and then I gave up, declared it dead, and went to sleep, trying not to think about how much data I had lost.

Surprisingly, over the next few days, I found that life without a computer wasn’t that hard. The amount of work I could get done just using my phone— sending emails, coordinating group meetings, almost anything web-based— was impressive. In addition, I have an iPad that I usually use for taking notes (and drawing the pictures for these blog posts!), and I found that in most cases, my iPad could easily replace my laptop. I realized that I don’t actually use my laptop all that much for schoolwork; if anything, I mostly use my laptop for writing that I do for fun. I do most of my coding in the computer labs now, so I didn’t lose any of my computer science work, and almost all of my other classwork is on Google Drive. The reality is that none of the files I lost were super important.

Of course, it has felt pretty silly to walk around without a computer as a computer science major. I can’t do any coding without going to the GDC labs, which means I can’t code without people around anymore. Luckily, I don’t have a bunch of coding this semester, but it has been difficult to do web-based homework on websites that have horrible mobile layouts or require Flash to work. I might feel incomplete, but at the end of the day, the wonders of saving files to the cloud and operating mostly through web-based apps is that I didn’t lose anything important and my day-to-day life hasn’t been hindered.

Of course, I don’t intend to stay computer-less forever, because at some point, I’m going to need my own machine that I can code on, whether it be for research or interviews. So what have I learned from this? First, the cloud is a wonderful invention and I am thankful for it. Second, don’t mess around with your computer without saving your files and creating backup drives. Third, I don’t actually use my computer that much. And fourth, if you tell your lab supervisor that the reason you missed a deadline is because you wiped your own hard drive, he will laugh at you, but he won’t be mad.

I hope you don’t destroy your own computer, and make sure to back up your work always!

Back ups are for chumps! Keep your digital life fresh by periodically deleting all your data! *Points finger at forehead* Can’t lose data if you don’t have any!
What about wipe the whole hard drive? Are those spaces unallocated? Boot loader might get currupted
I actually wiped and reformatted my hard drive, and my computer mostly works now, although it seems to be a little slower than before.