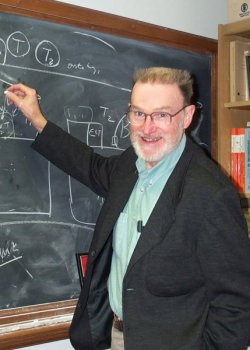 Graduate students are essential to UT Computer Science’s mission to lead in the creation of scientific knowledge and practical technologies defining the digital revolution of the 21st century. In honor of Dr. Browne’s 65th birthday, UT Computer Science established the James C. Browne Graduate Fellowship Fund in 2000. The gifts from family, friends, and colleagues have allowed for two graduate fellowships to be awarded each year since its founding. A gift made to Dr. Browne’s graduate fellowship fund will promote continued growth and academic strengthening of the best and brightest minds in the field of parallel programming, while ensuring that graduate students in computer science at UT Austin have access to all of the financial resources they need to pursue their studies.

James C. (Jim) Browne, one of the original members of the Computer Science Department at The University of Texas at Austin, passed away on January 19 after a brief illness and will be sorely missed. Jim was an institution at the departmental and the university level, being a faculty member at the university for more than 45 years. He was a past Professor of Computer Science and Physics and holder of the Regents Chair #2 in Computer Science. He was the first permanent chairperson for the department and served as chair three times. Browne was also the founding director for the computing centre at Queens University Belfast in Northern Ireland.

He attained fellow status in five different professional societies and areas: the Association for Computing Machinery, the British Computer Society, the American Physical Society, the American Association for the Advancement of Science and the Institute for Constructive Capitalism.
Browne published about 500 papers over his 50-year research career and in 2004 received The University of Texas at Austin Career Research Excellence Award for maintaining a superior research program over many years.

But the accomplishments of which Browne was most proud are serving as the supervisor or co-supervisor for the graduate studies of 68 Ph.D. students and 65 master’s degree students and for a substantial number of undergraduate honors theses. He has also served on several hundred Ph.D. supervision committees across multiple disciplines.