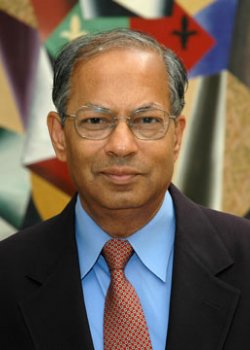 Graduate students are essential to the UT Computer Science’s mission to lead in the creation of scientific knowledge and practical technologies that are defining the digital revolution of the 21st century. A donation made to Dr. Misra’s graduate fellowship fund promotes the continued growth and academic strengthening of the best and brightest minds in the field of computational systems, while ensuring that graduate students in computer science at UT Austin have access to all of the financial resources they need to pursue their studies.

Misra’s research focuses on structuring of concurrent and distributed computing with emphasis on programming languages, semantics and application design.

Misra is a fellow of the ACM and IEEE. He held the Guggenheim fellowship during 1988-1989, and was the Strachey Memorial lecturer at Oxford University in 1996. He received an honorary doctorate (Doctor Honoris Causa) by the Ecole Normale Superieure de Cachan, France, in 2010.  He was identified as a highly cited researcher by ISI, Thompson, in 2004. Some of the teaching recognitions he has received include election to the Academy of Distinguished Teachers at the University of Texas at Austin and the Regents’ Outstanding Teaching Award of the University of Texas System.