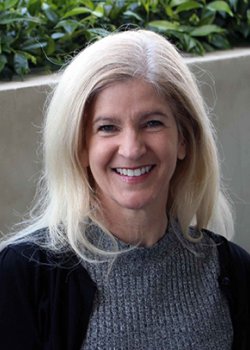 Dr. Kathryn S. McKinley, Scotty Strahan, and their sons Cooper, Dylan, and Wyatt founded this fellowship to encourage students to pursue a Ph.D. in computer science, even though they may face social or economic obstacles.

As a woman and the first member of her family to earn a Ph.D., Dr. McKinley often was confronted with bias and limited social support during her Ph.D. studies. However, she was extremely fortunate to have a few faculty members who introduced her to research, mentored her, and encouraged her persistence. She has taught and mentored over a 1,000 Ph.D. students and directly supervised 22. For over 20 years, she has been a speaker and mentor in CRA-W and other programs that encourage women and minorities to pursue their Ph.D.s. This fellowship represents her and her family’s continued devotion to Ph.D. students and their success, and in particular, to students who face any obstacles due to their social environment or financial resources.

Dr. McKinley is currently a Research Scientist at Google and an Adjunct Professor at the University of Texas at Austin. She was previously a Principal Researcher at Microsoft (2011-2017) and held an Endowed Professorship at The University of Texas (2001-2013). She received her B.A., M.S., and Ph.D. from Rice University. Dr. McKinley’s research spans programming languages, compilers, runtime systems, architecture, and performance with a recent focus on programming models for estimates, performance tools, and cloud. She and her collaborators have produced several widely used tools: the DaCapo Java Benchmarks (30,000+ downloads), the TRIPS Compiler, the Hoard memory manager, the Jikes RVM Java Virtual Machine, the MMTk memory management toolkit, and the Immix garbage collector. Her awards include the ACM SIGPLAN Programming Languages Software Award and the ACM SIGPLAN Distinguished Service Award. Her research received test-of-time awards from OOPSLA (2), ICS, and SIGMETRICS, and best paper awards from ASPLOS, IEEE Micro Top Picks (4), SIGPLAN Research Highlights, and CACM Research Highlights (2). She was program chair for ASPLOS, PACT, PLDI, ISMM, and CGO. She is a CRA and CRA-W Board member.