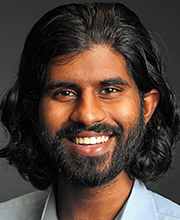 Tarun Nimmagadda is a co-founder of Mutual Mobile, the product development and innovation agency he co-founded at the age of 22. A tinkerer and creative thinker, Tarun was an early believer in the promise of connected devices. His work was awarded Dell’s first Social Innovation Prize for dramatic improvements made to accessibility mapping and navigation, a project inspired by his participation in the first fully-autonomous urban vehicle competition, the DARPA Grand Challenge. After immigrating from India in 2004 to study at the University of Texas, Austin, Tarun received Honors in Computer Science. Tarun, along with Mutual Mobile’s founding team, was named to Inc’s 30 Under 30, Forbes’ 50 Most Promising Companies, and recognized by the White House as one of the top 100 companies founded by young entrepreneurs. Today, Tarun leads strategy at Mutual Mobile and serves as serves an advisor to a number of startups.