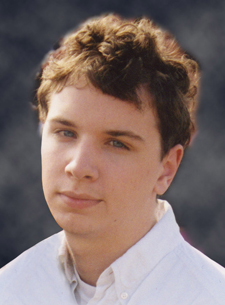 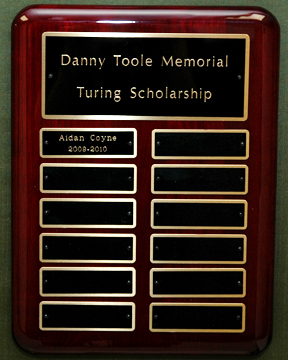 UTCS is pleased to announce that William J Daspit is the 2011 recipient of the Danny Toole Memorial Turing Scholarship Fund. William will receive a full year of support, which will ensure that he can focus on this academic year as a Turing Scholar without the worry of financial issues.

UTCS is happy to announce the 2010 recipient of the Danny Toole Memorial Turing Scholarship Fund, Jonathan N Thompson. Jonathan will receive a full year of support, which will ensure that he can focus on this academic year as a Turing Scholar without the worry of financial issues.

The Danny Toole Memorial Turing Scholarship is commemorated with a plaque in the main hall in Taylor Hall. Each year, the Turing Scholar student recipient's name will be added to the plaque.

If you are interested in giving to the Danny Toole Memorial Turing Scholarship Fund, please see the instructions at the bottom of this page.

UTCS is delighted to declare the first recipient of the Danny Toole Memorial Turing Scholarship Fund, Aidan Coyne. Aidan is an entering freshman and will receive a full year of support. The support will ensure that Aidan can focus on his freshman year as a Turing Scholar without the worry of financial issues.

Calvin Lin, Director of the Turing Scholars program, says that Aidan shares a lot of the spirit of exploration that Danny had: three years ago he taught himself to program in C and C++ from books and online tutorials, and he recently has become interested in robotics and genetics. Aidan is from New York and went to school in Connecticut.

Both Aidan and the Toole family will meet at UTCS's annual scholarship lunch in February.

1. At 9 am, on October 2, 2007, Danny Toole will be remembered at a flag lowering ceremony at the flagpole on the Main mall by the Tower. This event marks his 21st birthday and your attendance is invited.

Additional contributions to the fund for increased Turing Scholar support may be made as outlined in the donation instructions below.

University of Texas at Austin Computer Sciences student, Daniel Gregory Toole, 20, passed away unexpectedly in a tragic accident Sunday, October 21, 2007. Danny was in the Vanguard program for gifted and talented students at Herod Elementary School in Houston, and was also in the SPIRAL program in Spring Branch ISD. Then he attended Cornerstone Academy and Memorial High. He had planned to become a software entrepreneur and pursued that goal through participation in Turing Scholars, an elite honors program for University of Texas computer science students. In the summer of 2007, he was employed as a software engineering intern at BorgSolutions, Inc. in Austin, Texas.

As a young boy, Danny showed keen mechanical and logical abilities, which he demonstrated with Lego Robotics, K'Nex, and other building sets. He built and programmed his own Lego Robotics robots, and designed and built his first computer from parts he bought at Fry's at age 13. Danny was also interested in politics, philosophy, music and the human condition. He loved bicycling and took part in many bicycle rallies. Danny is survived by his parents, Shaun and Nan Toole; as well as his brother, Eric Toole. In lieu of flowers, the family requests that contributions be made to: The Danny Toole Memorial Turing Scholarship.

* You will receive a tax acknowledgement and thank you letter within 30 days.

Thank you for your contribution to this important scholarship.