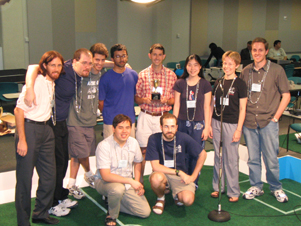 After a successful RoboCup US Open 2004, the UT Austin Villa Robot Soccer Team took their team to RoboCup 2004.

Earlier this year in April, UT Austin Villa, supervised by Dr. Peter Stone, competed in the 2004 RoboCup US Open. Other teams present in the Legged Robot league were from universities such as Carnegie Mellon, Georgia Tech, and Columbia University.

UT Austin Villa took an overall 3rd place in the Legged Robot league and 2nd place for Simulation League Coaching. After this success, the team went to Lisbon, Portugal for the RoboCup 2004 competition.

RoboCup 2004 was a great experience as detailed by Dr. Stone: 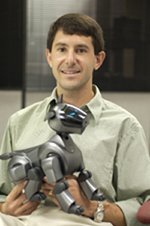 "In the legged league, the team made it to the quarterfinals and was among the top 5 or 6 teams (out of 24). In the first round, we won games by scores of 8-0, 6-0 and 10-0, and tied one 3-3 (against last year's runner-up and eventual 4th-place finisher this year). That qualified us for a quarterfinal match against a team from Newcastle, Australia."

"Most importantly, the students learned a lot, got good feedback about their work over the past year, and will be coming home full of new ideas!"