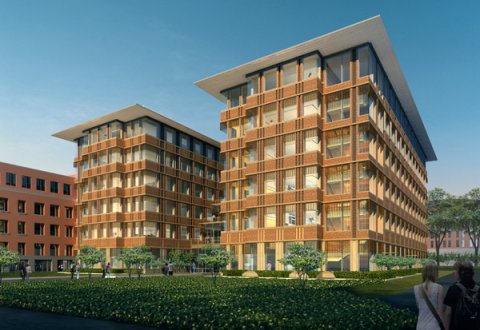 On Friday, October 29th, the Department of Computer Science (UTCS), the College of Natural Sciences (CNS) and The University of Texas at Austin (UT) celebrated a historic and critical milestone in UTCS's journey to its new home—the groundbreaking for the new Bill & Melinda Gates Computer Science Complex and the Dell Computer Science Hall—with the DigCS Street Fair & Groundbreaking.

The Street Fair had free food, games and goodies, thanks to our great student organizations and FoCS member companies. The fair featured student and corporate booths, Rock Band® stages, a performance by Arc Attack (a finalist on America's Got Talent) and a LEGO® model of Taylor Hall.

The Reception was also a grand success, with about 135 guests, including a Regent, the President, Provost and Dean, as well as government officials and corporate executives. Bill sent a video message for the celebration. The Michael & Susan Dell Foundation was represented by Kevin Byrne and Chris Mitchell. Marvin, the autonomous vehicle, and his group of able handlers delivered the shovels to the Groundbreaking Ceremony held on the Speedway Pedestrian Mall in front of the former Taylor Hall.