More than 56 percent of computer science majors who have applied for a job have received an offer making it the major with the highest offer rate from the Class of 2011, according to results of a new survey conducted by the National Association of Colleges and Employers (NACE).

Overall, job offers are up. This year, 41.2 percent of the members of the current class who applied for a job have received at least one offer, compared with 38.2 percent of the Class of 2010 at this time last year. 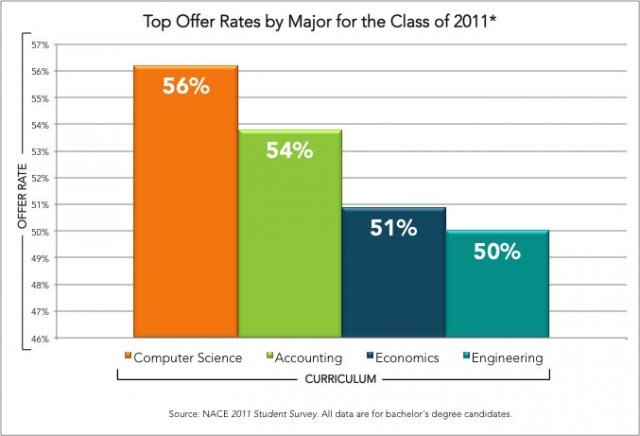 About the 2011 Student Survey: Each year, the National Association of Colleges and Employers (NACE) surveys college students on their job search, career plans, and other issues related to employment. This year, the survey was conducted mid-February through April 30, 2011. More than 50,000 students nationwide, including nearly 20,000 graduating seniors, took part in this year’s survey. Information in this release is based on data gathered from graduating senior respondents.

About NACE: Since 1956, the National Association of Colleges and Employers (NACE) has been the leading source of information about the employment of college graduates. For more information, visit www.naceweb.org. NACE maintains a virtual press room for the media at www.naceweb.org/pressreleases/.

Source: NACE - Computer Science Overtakes Accounting as Major with Top Offer Rate for the Class of 2011