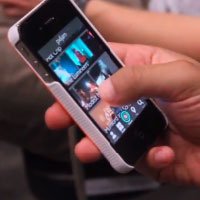 What do you get when you bring journalism students together with computer science students? Five teams working on creating mobile apps and getting them into the iPhone app store by semester’s end.

Robert Quigley, a senior lecturer in journalism, designed the class not knowing whether that expectation could be met. But by App Demo Day, on April 27, the proof was in the presentations.

“Journalists and computer scientists are carrying similar tool boxes these days so we’re trying to learn each other’s language,” says Wanda Garner Cash, associate director of the School of Journalism and one of the competition’s judges. Cash adds the course is a good example of how the School of Journalism’s new undergraduate curriculum is synching with changes in the news and information business.

“It’s a tremendous calling card for any student,” says Rodney Gibbs, a competition judge and chief innovation officer for The Texas Tribune, who believes the app-building experience will set students apart from 75 percent of journalism job applicants.

“A successful applicant to our organization cannot survive on writing alone. He must at least be able to collaborate with technologists — be they app developers, data journalists or programmers. And if he has experience creating an app, managing a tech team and finding a market for his app? That’s like an actor who can sing and dance, too. In showbiz they call that person a triple-threat,” Gibbs says.

In the fall of 2013, the School of Journalism will offer a similar class: Introduction to Mobile Programming for Journalists. The course will prepare journalism students for Mobile News App Design, which will be offered again in the spring of 2014.