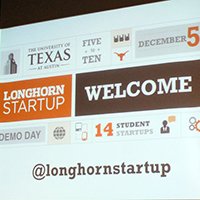 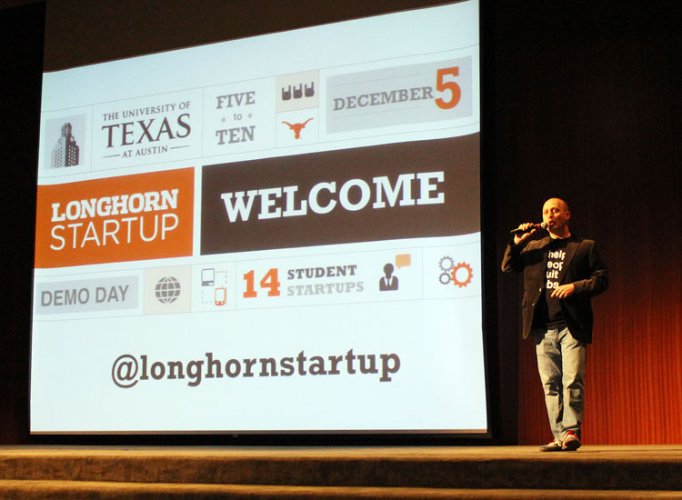 For one night in December Mark Cuban left the Dallas Mavericks’ sidelines and a took a break from Shark Tank to hear pitches from student entrepreneurs in the Longhorn Startup Program.

The fifth annual Demo Day, held Dec. 5, had a packed house in the LBJ Auditorium to hear a conversation between Cuban and Bob Metcalfe, professor of innovation at the Cockrell School of Engineering and director of Longhorn Startup. RetailMeNot CEO Cotter Cunningham also took the stage, and 14 student startups made presentations.

“The difference here from Shark Tank is that you have to have sales,” Cuban said. “But other than that, I would say some of the pitches I saw here tonight were better than ones I’ve seen on Shark Tank.”

Cuban discussed his past experiences with business, from his teenage years when he sold stamps to his current ownership of the Dallas Mavericks, reported The Daily Texan. He also gave advice to entrepreneurs.

Biomedical engineering senior Ani Sharma told The Daily Texan that through the Longhorn Startup Program he learned what it takes to put together and commercialize a product. “I want to hear the feedback people give me as we look to move our business forward,” he said. At Demo Day, Sharma presented the startup MicroMulsion, a new technology for cell culture research.

During the semester, Longhorn Startup Lab students not only work on developing their startups (which they must already have in progress before applying to the program), they also participate in lecture series and networking events, as well as receive hands-on mentoring from hand-picked entrepreneurs and experts.

Check out a Storify collection of tweets, photos and other posts from the evening’s events.