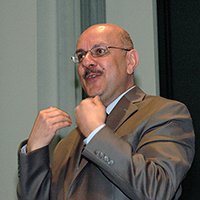 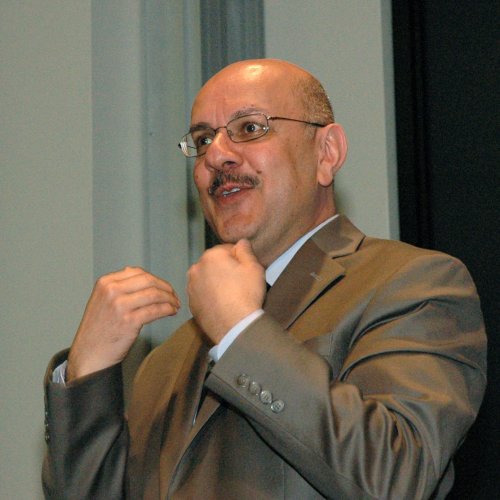 Farnam Jahanian, UTCS alum and leader of the National Science Foundation Directorate for Computer and Information Science and Engineering (CISE), returned to campus as a distinguished speaker. Hosted by Professor Aloysius Mok, the lecture was on "Innovating for Society: Realizing the Transformative Impact of Computing and Communication."

The computing discipline is at the center of an ongoing societal transformation. The explosive growth of scientific and social data, wireless connectivity at broadband speeds for billions of mobile endpoints, and seamless access to resources in the “cloud” are transforming the way we work, learn, play, and communicate. Computing and information research, infrastructure, and education form a pervasive intellectual fabric that connects a wide range of disciplines. Investment in ambitious, long-term research and infrastructure, as well as in the development of a computing and information technology workforce, are a national imperative.

The talk will focus on some of the technological and societal trends that are shaping our future and promise to accelerate the pace of scientific discoveries and engineering innovations. I will describe how these advances influence the investment portfolio of the National Science Foundation Computer and Information Science and Engineering Directorate and, therefore, also serve as key drivers of economic competitiveness and are crucial to addressing the grand challenges that face society today.

Farnam Jahanian leads the National Science Foundation Directorate for Computer and Information Science and Engineering (CISE). He guides CISE, with a budget of over $650 million, in its mission to uphold the nation’s leadership in computer and information science and engineering through its support for fundamental and transformative advances. Dr. Jahanian is on leave from the University of Michigan, where he holds the Edward S. Davidson Collegiate Professorship and served as Chair for Computer Science and Engineering from 2007 – 2011 and as Director of the Software Systems Laboratory from 1997 – 2000. His research on Internet infrastructure security formed the basis for the Internet security company Arbor Networks, co-founded in 2001, where he served as Chairman until its acquisition in 2010. Dr. Jahanian holds a master's degree and a Ph.D. in Computer Science from the University of Texas at Austin. He is a Fellow of the Association for Computing Machinery (ACM), the Institute of Electrical and Electronics Engineers (IEEE), and the American Association for the Advancement of Science (AAAS).