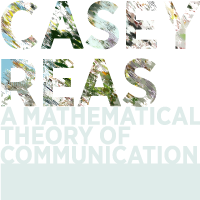 For artist Casey Reas creating art is like being a composer. The movements of a maestro conducting his opus are similar to those of paintbrush strokes. In the case of Casey though, he substitutes thse art supplies for software and lets his programmed paintbrush create what he compare’s to composer end results of an unexpected score.

The Los Angeles based artist’s work has recently found residence in the Gates Dell Complex. A Mathematical Theory of Communication is a two-part mural titled after Claude Shannon and Warren Weaver’s book.

“I became fascinated with wall drawings but not with how they looked,” Casey said. “It was less of how I felt but more of the system of drawing in itself. “

The mural was created by generating thousands of images with infinite variations to illustrate the idea that information is always circling all around. From radio, micro and satellite waves, the work captures and transforms it with an algorithm that produces the images.

“The origin of the piece is based on television signals that are collaged in real time,” explained Casey. “Cuts from the original camera are being cut in the software. This is my first time working with images in the mass media in a work."

Over six million pixels and four million lines collectively make up the mural that took 143 days to complete. Despite the dedication and elaborate aspects of the project, Casey says that the process never ceases to fascinate him.

“It’s continuously challenging your perception and keeping your eye active. As a viewer you get to be put in an algorithm, and in doing that made the process of doing this a pleasure from start to finish.”

Casey currently resides and works in Los Angeles, California where he is an associate professor in the Department of Design Media Arts at the University of California, Los Angeles. His work has been featured in more than one hundred exhibitions and venues around the world.