Helping Students to Thrive in a Digital World

Selecting a college major may be the biggest challenge when going to college. After 12 years of education, students are asked to choose that one specific field that they would like to focus on as a career. In many cases students have little to no exposure to these fields. That’s exactly why UT Computer Science created Project Engage—to provide students with the digital and computational skills they need to succeed in 21st century careers and motivate students to study computer science by offering college credit to high school computer science students. 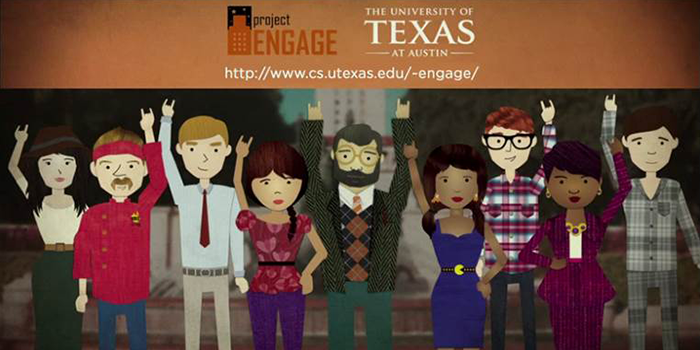 Project Engage achieves its goals by offering school districts the ability to deliver a Computer Science Principles course called, "Thriving in Our Digital World." Unlike lecture-based classes, which relegate students to the role of passive recipients of instruction, the Project Engage curricula uses Project Based Learning, a pedagogy that encourages students to actively learn by solving problems.

The course exposes students to big ideas in computer science that exist across disciplinary boundaries while developing many important college readiness skills such as critical thinking, communication skills, and teamwork skills.

The course was designed by UT Computer Science faculty and educators through support from the National Science Foundation and UT Austin's dual credit college readiness initiative, OnRamps. Aligned with Texas College and Career Readiness Standards and the expectations of leading research universities, "Thriving in Our Digital World" offers high school and community college students the opportunity to adapt to the rigors of college coursework while earning college credit from UT Austin or any other public college in Texas.

UTCS Professor Dr. Calvin Lin is a developer of the computer science OnRamps course.  He says that having a program provides an opportunity for students to be introduced to computer science in ways beyond studying for a standardized test.

“Before there were Java courses trying to help students get ready for an AP test, but computer science is so much more than just programming,” Dr. Lin said.  “This program helps to fill a void. It let’s them create something that has a programming aspect while seeing the technology behind it and all the work that touches so many lives, all before they go to college.”

Among students who enrolled full-time in Texas public universities in 2002, 75 percent didn’t earn a degree within four years and 34 percent still hadn’t earned a degree 10 years later.  It is shown that Texas high school students who complete just one dual credit course are nearly twice as likely to complete a college degree.

The program's goals of building a more accessible curriculum have been particularly successful among underrepresented groups, where "Thriving in Our Digital World" is reaching a more diverse audience than traditional AP computer science. “Dual-enrollment has been shown to benefit those who are at risk, to go to college and view it as an abstract thing,” Dr. Lin said. “Studies have shown that if a student takes even one dual-enrollment course, they feel like they can do it and like going to college becomes a less distant thought. They additionally do better in all of their courses.”

"Our country is facing a bit of a crisis," said Calvin Lin, professor of computer science at The University of Texas and lead researcher for the project. "The huge demand for CS graduates in dramatically increasing the demand for high school CS teachers, but at the same time this demand is driving up the salaries for programmers, making it increasingly difficult to attract new CS teachers at the K12 level. We need to find innovative ways to train new CS teachers, including methods that train in-service teachers who are not currently teaching computer science."

To prepare teachers to offer "Thriving in Our Digital World," Project Engage offers its partners professional development in a summer institute that focuses on both course content and pedagogy. The content ranges from how to teach programming languages like scratch and processing to units on Artificial Intelligence, and modules representing numbers, big data and data mining. These teachers receive ongoing support from an online learning environment and additional professional development throughout the year.

"I had one student who didn't really know what the course was about and maybe didn't even expect to get anything from it. Her mother recently emailed me and told me that she's really considering this as a career, where she never would have before."

Just three years ago Project Engage began in five schools in Texas. A year later the program expanded to 11 schools. Currently, the program is being implemented at thirteen Texas high schools, with the goals of eventually scaling this effort to several hundred Texas high schools and replicating the effort in other states through the university's UTeach Institute.

"The lack of computer science courses in high schools is a serious problem, so we're excited to address this issue," Lin said. "We're going to need to do much more, but this is a great start."