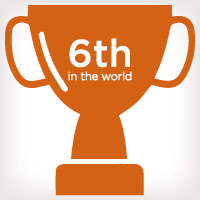 The University of Texas of Austin's computer science program is the 6th best in the world, according to the 2014 Academic Ranking of World Universities (ARWU) compiled by the Center for World-Class Universities at Shanghai Jiao Tong University.

According to the same study, the University of Texas of Austin as a whole is ranked 39th best university in the world and 28th best in the U.S.   The rankings, released Aug. 15, are the third this year to recognize UT Austin as one of the top universities in the world.  The Center for World University Rankings, based in Jeddah, Saudi Arabia, ranked The University of Texas at Austin No. 29 in its list of the world's top 100 universities. And Times Higher Education, the United Kingdom’s leading higher education publication, ranks UT Austin No. 27 in the world.

“UT’s international reputation is a testament to our first-rate professors, outstanding students and outstanding alumni. Their research, teaching and accomplishments change the world every day and draw international attention to our campus,” said President Bill Powers.

The latest rankings from AWRU also highlight UT Austin’s excellence in specific disciplines. It is No. 5 in the broad field of engineering and No. 6 in the specific subject of computer science. UT Austin and the University of California at Berkeley are the world’s highest-rated public institutions in these two technical areas.

Other specialty rankings place UT Austin No. 21 in social sciences, No. 24 in chemistry, No. 25 in mathematics, No. 31 in economics/business, and No. 30 in the broad field of natural sciences and mathematics.

The University of Texas at Austin has maintained this level of excellence while receiving less state funding and charging lower tuition than most of its peer public research universities in the United States.