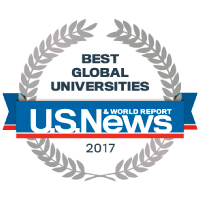 U.S. News & World ranked the University of Texas at Austin the 5th best university in the world for computer science out of 210 research universities, one spot higher than UT’s 6th ranking last year. Overall, the university ranked 30th globally.

According to U.S. News & World, the Best Global Universities rankings are based on academic research and weighs factors such as a university’s research reputation and academic research performance, determined by amount of publications, citations and international collaboration. This year, the report emphasized quality of academic research by taking into account the number of research papers from each university that are among the top 1 percent of most-cited papers in each academic field.

The United States performed best in computer science out of the countries the report ranked, including China and the United Kingdom. Among other U.S. schools, only the Massachusetts Institute of Technology and Stanford University ranked higher than UT, and Harvard University, the University of California - Berkeley and Princeton University were ranked below UT.