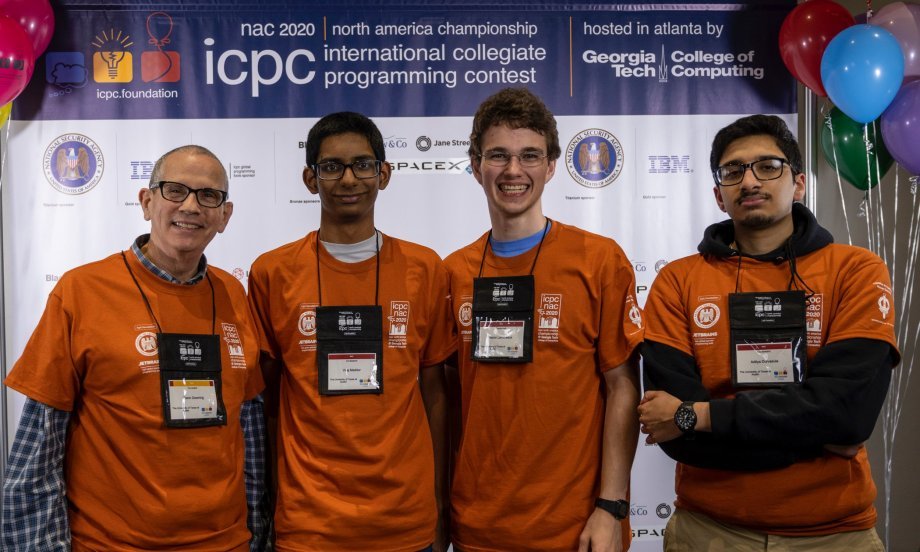 The UT Programming Team at the ICPC NAC in Atlanta, Georgia

On Sat, 22 Feb 2020, the UT Programming Team competed in the ICPC North America Championship (NAC) in Atlanta, Georgia, hosted by Georgia Tech.
The competition consisted of 60 teams of 3 students from 60 schools (approximately 180 students) from across the U.S. and Canada. UT Austin solved 6 of the 12 problems and came in 13th out of 60.

In addition to that contest, one of the sponsors, the NSA, ran a Cyber Security Challenge. UT Austin won that competition! Our three students earned $500 each in prize money.

The three students are: Aditya Durvasula ('19), Aaron Lamoreaux ('23), and Viraj Maddur ('23). They will compete again at the ICPC World Finals this coming June in Moscow, Russia.

UT has been competing in ICPC since 1997. This summer will be UT's fourth consecutive appearance at the world finals. UT went to the 2016 world finals in South Dakota, the 2017 world finals in Beijing, and the 2018 world finals in Portugal. UT has seen marked improvement since the creation of a new elective, CS104c: Competitive Programming in 2014, taught by the faculty coaches Etienne Vouga and Glenn Downing, and the student officers of the UT Programming Contest.

The ICPC traces its roots to 1970 when the first competition was hosted by pioneers of the Alpha Chapter of the UPE Computer Science Honor Society. The initiative spread quickly within the United States and Canada as an innovative program to increase problem-solving aptitude and opportunities of the strongest students in the field of computing.

Over time, the contest evolved into a multi-tier competition with the first championship round conducted in 1977. Since then, the contest has expanded into a worldwide collaborative of universities hosting regional competitions that advance teams to the annual global championship round, the ICPC World Finals.
The International Collegiate Programming Contest (ICPC) is the premier global programming competition conducted by and for the world’s universities. The ICPC is affiliated with the ICPC Foundation and is headquartered at Baylor University.

The contest fosters creativity, teamwork, and innovation in building new software programs, and enables students to test their ability to perform under pressure. The contest has raised aspirations and performance of generations of the world’s problem solvers in the computing sciences and engineering.