UTCS Awards and Honors for Spring 2004

Allen Emerson and Jayadev Misra were each noted as one of the world's most highly cited researchers by the Institute for Scientific Information. 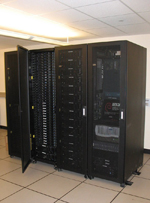 Seth Pettie (Ph.D. Graduate of UTCS) received an Outstanding Dissertation Award for 2004 for his dissertation titled "On the Shortest Path and Minimum Spanning Tree Problems" written under the supervision of Vijaya Ramachandran.

The Austin Villa Robot Soccer Team, under the supervision of Peter Stone, won 3rd place at the 2004 RoboCup US Open, earning eligibility to go to the 8th RoboCup International Competition.