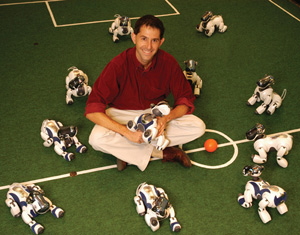 AUSTIN, Texas - Dr. Peter Stone, assistant professor in the Department of Computer Sciences at The University of Texas at Austin, received the 2007 Computers and Thought Award from the International Joint Conferences on Artificial Intelligence (IJCAI).

The Computers and Thought Award is presented at IJCAI conferences to outstanding young scientists in artificial intelligence. The award was established with royalties received from the book, Computers and Thought, edited by Edward Feigenbaum and Julian Feldman. Generally regarded as the most prestigious award in artificial intelligence, it is awarded once every two years to a scientist of age 35 or younger. Stone is the twentieth winner since 1971. He delivered the award lecture in January at IJCAI 2007 in Hyderabad, India. Read more and see a video of his presentation.

Stone's selection recognized his contributions to machine learning in multi-agent systems, particularly in collaborative and adversarial dynamic environments. He has developed teams of robot soccer agents that have won six robot soccer tournaments (RoboCup) in both simulation and with real robots. He has also developed agents that have won five auction trading agent competitions (TAC).

Find out more about Peter Stone: