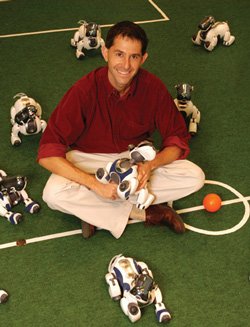 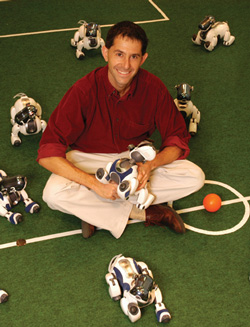 AUSTIN, Texas — Peter Stone, associate professor of computer sciences at The University of Texas at Austin, has been awarded a 2008 Guggenheim Fellowship for his work on teams of mobile robots.

Stone is one of 190 artists, scientists and scholars who received the fellowship from the John Simon Guggenheim Memorial Foundation. Successful candidates were chosen from a group of more than 2,600 applicants, and the awards total $8.2 million.

Since 1925, Guggenheim Fellowships have recognized professionals who demonstrate distinguished scholarly achievement and exceptional promise for future accomplishment in the fields of natural sciences, social sciences, humanities and creative arts.

Stone's research program focuses on machine learning and robotics, particularly in collaborative and adversarial dynamic environments. He is team leader of the UT Austin Villa robot soccer team, a team of artificially intelligent robots that competes in the worldwide RoboCup soccer competitions. He has been a world champion team member in six RoboCup events.

Stone and his students were also semi-finalists in DARPA's Urban Challenge, a national competition where autonomous cars navigate themselves through an urban environment.