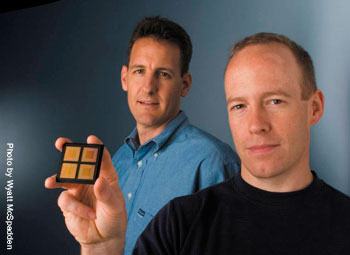 AUSTIN, Texas - In recognition of their contributions to the field of computer science, Doug Burger and Stephen Keckler will receive a 2010 Edith and Peter O’Donnell Award from The Academy of Medicine, Engineering and Science of Texas (TAMEST).

TAMEST will present the awards during its annual conference Jan. 7 at the Westin Riverwalk Hotel in San Antonio, Texas.

Keckler, co-director of the Computer Architecture and Technology Laboratory, is a professor of computer science and electrical and computer engineering at The University of Texas at Austin. His research interests include computer architecture, parallel processors, high-performance computing, VLSI design and the relationship between technology trends and computer architectures. He co-led the TRIPS project, which has developed and prototyped high-performance adaptive computer systems.

Keckler’s research has been supported by more than $20 million in funding from DARPA, the National Science Foundation, IBM and Intel. He is an Alfred P. Sloan Research Fellow, the 2003 winner of the Association of Computing Machinery (ACM) Grace Murray Hopper Award, recipient of a National Science Foundation CAREER Award and a winner of the 2007 President’s Associates Teaching Excellence Award.

Burger is an adjunct professor of computer science at The University of Texas at Austin and is also a principal researcher at Microsoft Research where he manages a research group in computer architecture. His research efforts span computer architecture, new computing technologies, power-efficient computing, mobile computing, data center design, cloud computing services and compilers. He co-led the TRIPS project with Keckler while at the university.

Burger’s research has been recognized with several awards, including more than $20 million in funding, a National Science Foundation CAREER Award, a Sloan Foundation Fellowship and the 2006 ACM Maurice Wilkes Award.