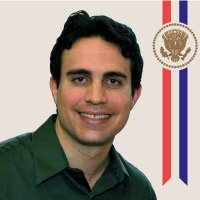 Assistant Professor Brent Waters has earned a Presidential Early Career Award for Scientists and Engineers (PECASE) for his research in cryptography and computer security from President Barack Obama.

Brent was nominated by the National Science Foundation (NSF) after winning an NSF CAREER award for "Foundations and Extensions of Public Key Cryptography.” A large part of this research focuses on a concept he developed called "Functional Encryption,” which is a new vision of how one encrypts data.

PECASE is the highest honor that the U.S. government awards to science and engineering researchers in the early stages of their careers.

In announcing the 96 recipients, representing all areas of science and engineering, President Obama said: "Discoveries in science and technology not only strengthen our economy, they inspire us as a people... The impressive accomplishments of today's awardees so early in their careers promise even greater advances in the years ahead."

The awards, established by Former President William J. Clinton in February 1996, are coordinated by the Office of Science and Technology Policy within the Executive Office of the President. Award nominees are considered according to two criteria: their pursuit of innovative research at the frontiers of science and technology and their commitment to community service as demonstrated through scientific leadership, public education, or community outreach.