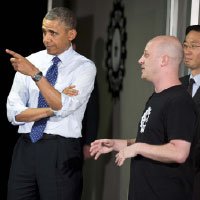 President Barack Obama chose Austin as the first stop on his Middle Class Jobs and Opportunities tour for its reputation as a hub for innovation, technology, and education.

The president’s visit included a stop at Capital Factory, a high-tech startup incubator founded by entrepreneur Josh Baer, an instructor with the department of computer science who teaches and co-leads the Longhorn Startup Program.

Chris Slaughter, engineering student and CEO of Longhorn Startup’s Lynx Laboratories, gave the president a demonstration of the company’s 3D camera. The camera is supported by student-developed software that can capture and help accurately render all the 3D surfaces in a room. Lynx Laboratories was presented as an example of the innovation coming out of both the university and the vibrant Austin entrepreneurship scene.

In addition, the White House issued a statement saying that, “President Obama will meet with entrepreneurs at the Capital Factory—a startup incubator—who are already leveraging open government data to create new products and services as part of his new series of middle-class jobs and opportunity tours to highlight how a growing, thriving middle class is critical to America’s economic future."

The meeting served to highlight the executive order he issued on the same day making government data available to the public in machine-readable formats to enable entrepreneurs and researchers to use the data to create new businesses and services. The president also announced his intention to create three new manufacturing innovation institutes, where businesses, universities, and government would partner to develop new manufacturing technologies.

Started in 2011, Longhorn Startup is a course designed to give entrepreneurial support to undergraduates at The University of Texas at Austin. An interdisciplinary project led by computer science’s Josh Baer and engineering’s Bob Metcalfe, the Longhorn Startup is open to all UT Austin undergraduates who have ventures or are launching companies. As part of the program, each startup team is connected to an entrepreneur mentor from the Austin area. In addition to mentoring, students gain business, networking and presentation skills during the one semester course.