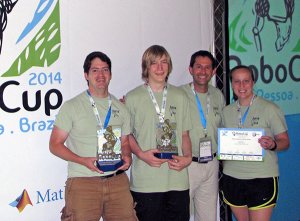 Congratulations to Professor Peter Stone and his students for impressive wins in the RoboCup 2014 competition in Joao Pessoa, Brazil.

After making a significant technical jump forward in the 3D simulation league in 2011, using a machine learning method to learn a robust and stable humanoid robot walking controller, the UT Austin Villa team made another technical jump forward this year by using a similar approach to learn a robust and accurate kick motion—a fundamentally different kind of motion than walking—helping the team to regain its championship from 2011 and 2012. Ph.D. student Patrick MacAlpine led the effort, with significant help from Mike Depinet and graduate student Jason Liang.

UT Austin Villa also won first place in the technical challenge competition, which compares teams on focussed research challenges. One of the challenges this year was a "drop-in" challenge that required creating a player that can play with previously unknown teammmates.