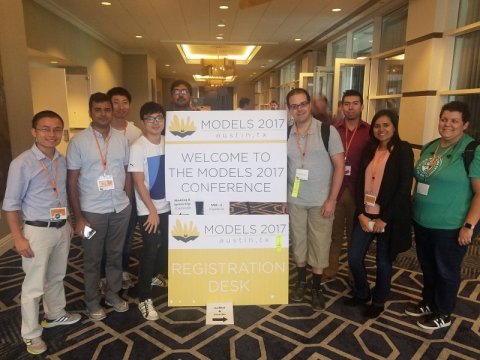 The conference consisted of a main conference on Sept. 20-22, where papers accepted for the conference were presented, and a satellite conference made up of several workshops and tutorials on Sept. 17-19. Keynote speakers included Jeannie Falcon, chief engineer for control and simulation at National Instruments; Ira Baxter, CEO and CTO of computer consulting company Semantic Designs; and Adam Porter, professor of computer science at the University of Maryland and executive director of the Fraunhofer Center for Experimental Software Engineering. Falcon covered efforts to overcome challenges in modeling and simulation such as cutting down on time needed to develop and calibrate models, Baxter spoke about how to treat models and code consistently when converting between the two, and Porter discussed the Fraunhofer organization and how they use models in their everyday work.

UTCS professor Don Batory served as the general chair for the conference.

According to Jeho Oh, UTCS PhD student and student volunteer co-chair of the conference, models are conceptual representations of problems that try to capture the structure and logic of an analyzed system.

“They foster common understanding and allow verifications which can become very complicated without it,” Oh said. “This is especially critical for complex, safety-critical systems, to make sure that the system works regarding the domain knowledge while avoiding flaws in the design which may incur system failures.”

National Instruments group manager Taylor Riché said models use frameworks that represent the software at a higher level than the code itself.

“By ensuring these higher-level constructs are correct, we can then use repeatable transformations of these models to create software that is hopefully cheaper to build and less buggy,” Riché said.

For example, LabVIEW, a software product from National Instruments, helps scientists and engineers model their work.

“Many other companies use modeling to ensure that their software is more correct than traditional programming methodologies, and the MODELS conference continues to try to increase industrial involvement and interest,” said Riché, who is the project facilitator for LabVIEW NXG.

Oh, who works with Batory on efficiently finding optimal configurations for configurable software systems, said the keynote presentations and panel sessions were interesting because they showed the different perspectives between industry and academia.

“Many methods proposed in academia have not yet been used in the industry, and it seems to take a long time and effort to make something in paper be actually usable,” he said. “I believe meeting people with similar interests is one big merit of attending conferences, besides the technical presentations.”

“It was great to have barbeque at the banquet, maybe something only possible in Texas!” Oh said.