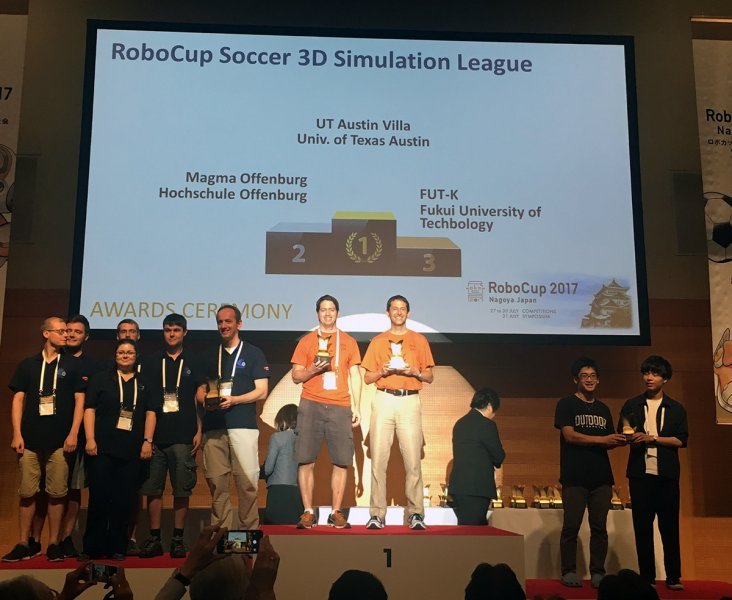 Team UT Austin Villa won 3rd place in the Robocup@home competition, in the Domestic Standard Platform League. Other US institutions participating in this league include: UC San Diego, Northeastern, and Berkeley. Three of these teams qualified to compete in Japan (UT Austin, UCSD and Northeastern). UT Austin Villa was the only US team to advance to the second stage of the competition.
RoboCup is an international scientific initiative with the goal to advance the state of the art of intelligent robots through competitions. The RoboCup@Home league aims to develop service and assistive robot technology with high relevance for future personal domestic applications. A set of benchmark tests is used to evaluate the robots' abilities and performance in a realistic home environment setting, the competition arena looked a bit like 4 identical IKEA apartments.  Robots were tasked with things like, unpacking groceries, setting/cleaning a table, recognizing and interacting with people in the environment.
The UT Austin Villa team is made up of five professors across three departments, and a team of 24 postdocs, Ph.D., Master's, and undergrad students:
Patrick MacAlpine, a Ph.D. student working with Stone, led the UT Austin Villa team to victory in the 3D Simulation League. The team won all 23 games, earning their 6th championship in the last 7 years.
News categories:
Awards & Honors
Faculty
Graduate Students
Undergraduate Students