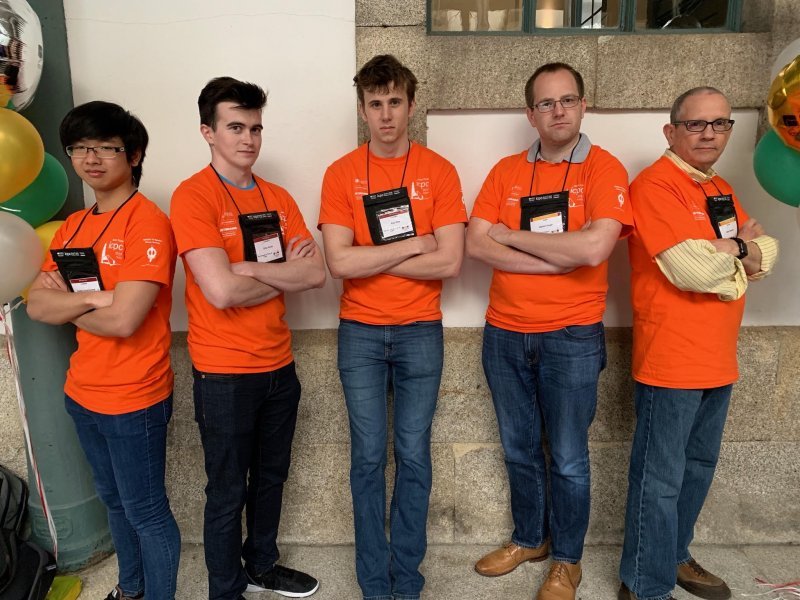 UT solved 6 problems and came in 28th place, 3rd place in North America. Last year they came in 65th place. The year before that they came in 109th place.

Teams consist of three students. The students on the UTPC team were Ethan Arnold ('19), Ryan Rice ('18), and Supawit Chockchowwat ('20). The faculty coaches were Etienne Vouga and Glenn Downing.

UT qualified for the world finals by winning the South Central USA Region, which includes Texas, Oklahoma, and Louisiana with over 60+ teams from 25+ schools. UT has been competing in the ICPC since 1997, and places in the top 5 at the regionals almost every year.

Qualification for the world finals this year followed a concerted effort to improve UT's performance at the contests, including the creation of a new elective, CS104c: Competitive Programming , taught by the faculty coaches and club officers.

The ICPC International Collegiate Programming Contest is the premier global programming competition conducted by and for the world's universities. The ICPC is affiliated with the ICPC Foundation, enjoys the auspices of the ICPC Foundation, and is headquartered at Baylor University. For over four decades, the ICPC has grown to be a game­changing global competitive educational program that has raised aspirations and performance of generations of the world's problem solvers in the computing sciences and engineering.

In ICPC competitions, teams of three students represent their university in multiple levels of regional competition. Volunteer coaches prepare their teams with intense training and instruction in algorithms, programming, and teamwork strategy. Several ICPC universities and ICPC volunteers provide online judging systems to all free of charge. Top teams from regional competition advance to the final round. This year's regional competitions will advance teams to the World Championship round — the 2019 ICPC World Finals hosted by the University of Porto and the City of Porto — which will be conducted on 4 April 2019 in Porto, Portugal.

The contest evolved into a multi-tier competition with the first finals held at the ACM Computer Science Conference in 1977. Operating under the auspices of the ICPC Foundation and headquartered at Baylor University since 1989, the contest has expanded into a global network of universities hosting regional competitions that advance teams to the ICPC World Finals.

In the past 20 years alone, ICPC participation has increased by more than 2000%. Last year, ICPC Regional participation included 52,709 of the finest students and faculty in computing disciplines from 3,233 universities in 110 countries on six continents.

The annual event is comprised of several levels of competition:

Local Contests
Universities choose teams or hold local contests to select one or more teams to represent them at the next level of competition. Selection takes place from a field of over 300,000 students in computing disciplines worldwide.

Regional Contests
In last year's regionals, 52,709 contestants from 3,233 universities in 110 countries on six continents competed at over 653 sites to advance to the world finals.

World Finals
World Finals 31 March - 5 April 2019 in Porto, Portugal
Hosted by the University of Porto and the City of Porto, the World Finalist teams will compete for awards, prizes, and bragging rights. These teams represent the best of great universities on six continents - the cream of the crop.