The Center for Information Assurance and Security (CIAS) has been founded at The University of Texas at Austin to address the nation's growing cybersecurity problems.

AUSTIN, Texas -- The Center for Information Assurance and Security (CIAS) has been founded at The University of Texas at Austin to address the nation's growing cybersecurity problems. 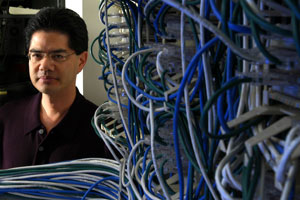 Primary center objectives are conducting research that will lead to innovative cybersecurity solutions and addressing the national need to produce more trained professionals in the field.

Recent surveys highlight alarming statistics about Internet and data security. For example, 43 percent of 500 organizations reported an increase in electronic crime in 2003. Each was victimized an average of 136 times, despite the majority using firewalls and physical security systems. Another recent survey found that nearly one in five companies was a target of cyber-extortion, including threats of theft of customer data and destruction or theft of intellectual property by cybercriminals. And a 2001 survey found that one in 20 U.S. adults were victims of online fraud, and one in 50 were victims of identity theft.

"Despite considerable industry spending to develop solutions, the cybersecurity problem continues to grow at an alarming rate," said Dr. Frederick R. Chang, director of the CIAS and research professor. "These solutions have made us somewhat safer, but certainly not safe."

Chang, who chairs the board of the Austin Technology Council, recently moved from his position as president of technology strategy for SBC Communications to the university's Department of Computer Sciences to lead the center's efforts. While with SBC, Chang developed a security lab that investigated how to protect large-scale Internet networks. He is a member of the National Security Agency (NSA) Technology Panel and serves on the Computer Science and Telecommunications Board Committee on Telecommunications Research and Development for the National Academy of Sciences.

The center will operate as a multi-disciplinary initiative involving business, government and academia. The university's CIAS team will include faculty, researchers and students from the Department of Computer Sciences, College of Engineering, McCombs School of Business and the Applied Research Laboratories.

"The new Center for Information Assurance and Security has been established as a multi-disciplinary entity, which will allow it to draw broadly on the many world-class researchers and educators who are working in the area," said Ret. Admiral Bobby R. Inman, former director of the NSA and current holder of the Lyndon B. Johnson Centennial Chair in National Policy at the university. "I believe that the new center is exceptionally well-positioned to make a significant national contribution to the growing cybersecurity problem."

Future CIAS plans include work toward becoming a National Academic Center of Excellence in Information Assurance Education, participating in a multi-university cybersecurity exercise and competition, and increasing collaborations with business, government and academia.

NOTE: Inman will become interim dean of the university's Lyndon B. Johnson School of Public Affairs in January 2005.